America Cares Bear, formerly known as Proud Heart Bear, is a toy-exclusive Care Bear who was first sold as a very limited release in 2003, despite initially debuting as an "environmentally aware" bear in 1991.

Proud Heart has a strong connection to the environment, encouraging others to make sure they take care of it.

Her Belly Badge was blue, with a heart-shaped American flag in the center.

She is a happy, patriotic, and energetic bear who believes that America's greatest strengths are caring, helping others, and teamwork.

America Cares Bear is solid white and her Belly badge depicts a blue and white shooting star with a red and white-striped trail.

Proud Heart Bear debuted as part of the short-lived Care Bears Care About the Environment campaign in 1991, which featured redesigned versions of many of the Care Bears which were done in order to raise environmental awareness.

She also appeared as a walkaround character for promotional events.

Under her current name, America Cares Bear was first released as a collector's edition plush toy by Play Along in 2003 to help celebrate the 20th anniversary of the Care Bears franchise. She was since made available in several variants, including loose and boxed versions.

America Cares appears in Unlock the Magic merchandise, such as in the book The Bears Are Back in Town - The Ultimate Guidebook. She first appeared in this form on the Care Out Loud calendar on the Care Bears website.

Although her Unlock the Magic-style appearance lacks eyelashes, The Bears Are Back in Town - The Ultimate Guidebook still refers to her with female pronouns. 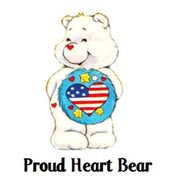 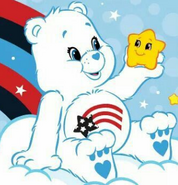 Another 2D picture of America Cares.
Add a photo to this gallery

The Bears Are Back in Town - The Ultimate Guidebook: No other bear out there is as patriotic as America Cares Bear. This optimistic go-getter knows that everything is possible as long as one keeps at it and never gives up. She believes that the many different backgrounds and influences of Americans is what makes the United States truly great. America Cares reminds us that we should all do what we can to care for one another and the world.

Retrieved from "https://carebears.fandom.com/wiki/America_Cares_Bear?oldid=27157"
Community content is available under CC-BY-SA unless otherwise noted.