Amigo Bear is a Care Bear who originally debuted as a plush toy by Play Along in 2006. He has since made a appearances in various 2000's Care Bears media, including the Adventures in Care-a-Lot series and its corresponding films.

While all Care Bears speak the universal language of caring, Amigo Bear is particularly flexible in the communication department. Being the first truly bilingual bear doesn't just give him a padded résumé, but also twice the potential reach out and help those in need. His goals themselves are two-fold: he wants to be an amigo to all those around him, and do so while representing Hispanic culture. Though his name literally translates to "Friend Bear", he is not to be confused with the actual Friend Bear.

He has red-orange fur and his Belly badge is a red stylized spiral sun surrounded by small hearts.

Amigo made his debut in 2006 during the Care Bears relaunch toyline by Play Along. He was made available in several varieties, including comfy plush, "troll hair" plush, and a 12" limited edition mango-scented plush that is packaged and comes with a Care Bears Family DVD.

Amigo appears in Adventures in Care-a-Lot, where he is the local ice cream vendor of Care-a-Lot. His belly badge was also simplified to include a plain red aztec-style spiral sun surrounded by small hearts.

He is the main focus of the episode Ice Creamed, where his Ice Cream cart is smashed to pieces due to a failed plot by Grizzle, so Grumpy builds him a robotic cart that has an infinite supply of Ice Cream. In the end, he decides that a regular one is better as too much Ice Cream wouldn't be good for you.

Amigo appears in several minor roles and cameos in Welcome to Care-a-Lot and Care Bears & Cousins.

Amigo appears in Unlock the Magic merchandise, such as in the book The Bears Are Back in Town - The Ultimate Guidebook. 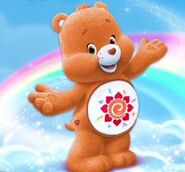 Amigo's CGI Welcome to Care-a-Lot appearance.
Add a photo to this gallery

2006-2007: The world is full of different people, languages and customs. Amigo Bear knows one "language" everyone speaks - friendship. Amigo is a friend to everyone everywhere and speaks many other languages, but especially Spanish. Amigo Bear's Symbol has a Latin look - it's a happy spiral sun circled with radiant hearts.

2007-2010: There are different kids of people everywhere, but Amigo Bear is friends with everyone! He can speak any language, especially Spanish and English! His belly badge is a bright spiral sun circled with hearts. Amigo shows that even though we look and speak differently we can all find friendship in our hearts.

The Bears Are Back in Town - The Ultimate Guidebook: Throughout his travels around the world, Amigo Bear has learned a lot, but the most important lesson he has learned is that communication is the key to building any new friendship. Being able to speak multiple languages gives Amigo the opportunity to make new friends wherever he journeys. Amigo loves teaching others about his own background while learning about their unique stories.

Retrieved from "https://carebears.fandom.com/wiki/Amigo_Bear?oldid=27150"
Community content is available under CC-BY-SA unless otherwise noted.