Smiling heart and star linked by a rainbow

Best Friend Bear is a Care Bear who was first introduced during the 2002-2006 franchise toyline re-launch, and has since made appearances throughout the series beginning with the film Care Bears: Oopsy Does It! in 2007.

Best Friend Bear believes there's someone for everyone. Not in an online dating kinda way, but more like two best buddies waiting to happen. Believing everyone should have someone, Best Friend acts as sort of a matchmaker between people or bears she thinks have something in common, and that true friendship lasts forever. Of course, when no one else is available, she's more than willing to fill the void until she can find someone suitable to take her place.

She has orchid fur and her Belly badge depicts a smiling yellow star and pink heart linked by a rainbow.

Best Friend Bear made her debut as a plush doll during the Care Bears franchise re-launch in the early-to-mid 2000s, and has since appeared in a number of different varieties, including a standard 10" plush, 5" soft plush, 8" limited edition lavender-scented plush, 10" Easter Bunny plush, and a 14" singing plush.

Care Bears: Oopsy Does It!

Best Friend makes her first animated appearance in the 2007 film Oopsy Does It! as one of the many residents of Care-a-Lot.

Best Friend appears in the 2007-2008 animated series Adventures in Care-a-Lot where she receives a redesign in the form of lighter, more fuschia-colored fur and longer hair pulled up in a ponytail with a yellow scrunchie.

Best Friend appears in the Care Bears: Welcome to Care-a-Lot television series, where she has a tendency to use the word "friend" throughout her dialogue.

She appears in the episode Cub Bouts, where she is first seen during the annual Belly Badge Bout competition, as a member of the "Bear-a-Lots" with Good Luck Bear, Love-a-Lot Bear, and Wish Bear, who have a rivalry with team Bear Power, made up of Grumpy, Funshine, Harmony, and Share.

Best Friend appears in Unlock the Magic merchandise, such as in the book The Bears Are Back in Town - The Ultimate Guidebook. 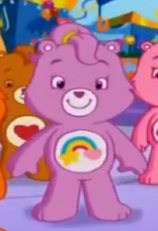 Best Friend Bear, as seen in the episode "Luck O' the Oopsy". 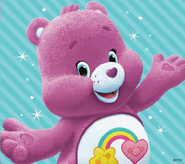 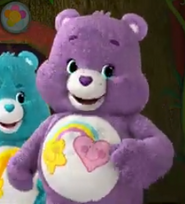 2002-2006, 2007-2011: Best Friend Bear lets you know you can always find someone to be your best friend! She knows friends stick together, no matter what. Her belly badge shows what it feels like to have a good friend and to be one, too. It's a smiling heart and a smiling star connected by a rainbow!

2015-2018 (Just Play plush): Best Friend Bear knows how special and important important friendship is, and it's her job to show her friends how to take care of each other. She's an expert on all the things best friends do - like sharing secrets, laughing and looking out for each other! The smiling star and heart on her belly are linked by a rainbow to show how happy our friends make us feel!

2018-2019 (JumpStart plush): Best Friend Bear knows how to care for best friends and keep them caring for each other. Even her belly badge shows the special caring bond between two close friends - a happy heart and smiley star, connected by a rainbow!

2020-present (JumpStart plush): Best Friend Bear truly believes everyone should have someone they can connect with in a meaningful way. But don't worry if you haven't found that perfect pal just yet, she'll be there for you to fill that void until your best buddy comes along.

The Bears Are Back in Town - The Ultimate Guidebook: There is a best friend for everyone out there; Best Friend Bear is certain of that. She has a talent for matching up bears who eventually become lifelong buddies. Best Friend is always there for a friend in need and can make friends in any situation. Best Friend is here to show what it feels like to have a best friend, and how to be one.

Retrieved from "https://carebears.fandom.com/wiki/Best_Friend_Bear?oldid=27093"
Community content is available under CC-BY-SA unless otherwise noted.