Birthday Bear is one of the ten original Care Bears who first appeared on American Greetings cards in late 1982. Since then, he has made a number of appearances in various forms of Care Bear-related media, but mostly including the original 1980's series.

Birthday Bear loves birthdays, and he loves to party. This much is very clear. And since someone's always having a birthday party somewhere, that means it's never a bad time to break out the cake, streamers, and whistles. If it's your birthday, even if you're alone, you can bet Birthday Bear's gonna be your best friend for the next 24 hours or so, and he'll even bring the favors. He's like an instant celebration - just add you.

He has golden yellow fur and his Belly badge depicts a pink cupcake with a single candle.

In the follow-up to the original TV special, Birthday is among the bears who must once again stop Coldheart and his new sidekick Frostbite from tricking a boy named Paul into helping him complete his "Careless Ray Contraption" that will freeze everyone's feelings.

When Grumpy Bear's new invention, the Rainbow Rescue Beam, accidentally teleports two children named Kim and Jason to Care-a-Lot, Birthday Bear is among the hosts who welcome them in true Care Bear fashion with a song.

Later, when the children and two other bears go missing following yet another transporting mishap, Birthday joins the crew of The Cloud Clipper to search for them in the Forest of Feelings.

After meeting some new friends in the form of the Care Bear Cousins, they are able to find their missing comrades and unite together against the evil Spirit, who is poised to plunge the world into un-caring.

The second Care Bears feature film tells the story of how the Care Bear family, including Birthday, first arrived in Care-a-Lot after escaping the clutches of the evil Dark Heart. When the villain returns some time later, he captures most of the bears, including Birthday and imprisons them in his secret lair.

Birthday Bear makes a cameo appearance in the third movie.

Birthday Bear is a minor character in The Care Bears Family.

Birthday Bear is a minor character in Welcome to Care-a-Lot, mainly appearing in background shots.

Birthday appears in Unlock the Magic merchandise, such as in the book The Bears Are Back in Town - The Ultimate Guidebook.

His first appearance in the Unlock the Magic art style is in a March 2020 Instagram post about Care Bears.

Share Bear with Birthday Bear from The Care Bears Movie. 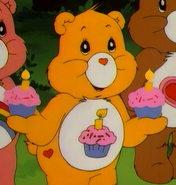 Birthday Bear as seen in the DIC series.

Birthday Bear as a Cub, from Care Bears Movie II: A New Generation. 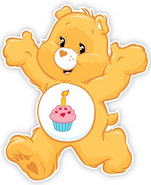 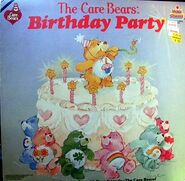 2002-2006: Birthday Bear wants everyone to have a happy birthday. He's a fun-loving bear who is completely at home at a party. He also loves giving presents and playing party games. The picture on his tummy shows his job well - it's a birthday cupcake with candle.

20th Anniversary: Birthday Bear's goal is to make sure that everyone enjoys a happy birthday. As a fun-loving, live-it-up kind of Bear, he embodies the spirit of celebration. He's also a big fan of opening presents and eating large quantities of party food. The birthday cake is an appropriate symbol for Birthday a bear. It symbolizes celebration - and that’s what birthdays are all about.

The Bears Are Back in Town - The Ultimate Guidebook: Birthday Bear will always find a reason to treat each day like one big celebration. After all, everyday is someone's birthday, so every day should be a bash! This party animal needs no excuse to whip out the bright streamers and birthday cake - whether it's a seventh, tenth, twelve-and-three-quarters, or an un-birthday - he'll be there. Birthday Bear's friends know that if they want their birthday to be perfect, this special bear has got it covered.

Retrieved from "https://carebears.fandom.com/wiki/Birthday_Bear?oldid=27132"
Community content is available under CC-BY-SA unless otherwise noted.