Male (according to some sources and Unlock the Magic)

Christmas Wishes Bear is one of the numerous holiday themed bears to be released, such as Trick-or-Sweet Bear. She has white fur with bright blue colored eyes, and her Belly Badge is decorated Christmas tree. Christmas Wishes is usually seen wearing a Santa hat and scarf, and has often been depicted as riding on a sled.

Christmas Wishes debuted in 2014 as a toy-exclusive Care Bear who was only released in Singapore, and later Japan.

He also appeared in a 2017 live show titled Care Bears: A Bearytale Christmas, held in the Suntec City Mall in Singapore to coinside with a Christmas mall event of the same name.

In 2019, HeadStart International released a limited edition plush of Christmas Wishes for the 2019 Holiday Season in Australia.

Although the character doesn't appear in Care Bears: Unlock the Magic, artwork of Christmas Wishes in the show's art style has been shown on the Care Bears social media pages as promotional artwork.

For the character's Unlock the Magic design, Christmas Wishes Bear is a light blue color instead of white, wears a red and white scarf instead of a green and red one, and the Christmas Tree Star on his belly badge is missing the face. Christmas Wishes' gender is also changed to male. 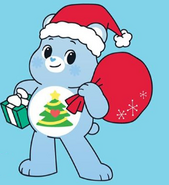 Promotional Picture of Christmas Wishes holding a Christmas sack.
Add a photo to this gallery

Retrieved from "https://carebears.fandom.com/wiki/Christmas_Wishes_Bear?oldid=26430"
Community content is available under CC-BY-SA unless otherwise noted.