Hadley Kay
Dark Heart is the former main antagonist of the second Care Bears movie and arguably the Care Bears' most dangerous adversary. A demonic entity capable of taking many forms, Dark Heart's mission was to capture all the Care Bears and Care Bear Cousins and spread his influence throughout the world.

Dark Heart is somewhat cocky and slightly arrogant. Unlike most other Care Bear villains, rather than hating love and caring for no reason, he dislikes it because he doesn’t understand it. This is shown when he became confused when Christy saved him from drowning in the river. He didn't start to understand that Christy cared about him until she almost died because of his magic, in which he showed his capacity to care for the first time, and begged the Care Bears to help her.

No matter what form he takes, he's always red. His true form appears to be a red cloud, while his human form (which later becomes permanent) is that of a red-headed teenage boy in a red and white jogging suit. At the end of the movie, he wears a camp t-shirt and green shorts.

Playing on the ambitions of a lonely girl named Christy at her summer camp, Dark Heart promised to make her more popular if she helped him capture the Care Bears. During one incident, Dark Heart lost his balance on a canoe and fell into the water, prompting Christy to pull him out. Startled that she would save him, Dark Heart continued on his mission, but was still puzzled over the rescue.

Finally successful in capturing the Care Bears and Cousins, Dark Heart was confronted by Christy, her best friends John and Dawn, and the founders of the Care Bears/Cousins True Heart and Noble Heart. After seeing she was willing to lose her popularity to help her friends, Dark Heart took away what he gave her, but warned her to run away and save herself.

After a fierce fight, the Care Bears and Cousins were freed and Christy was knocked into a coma after successfully rescuing them. Overcome with remorse, Dark Heart begged the Bears to revive her. Uniting together, the Care Bears, Cousins, and John and Dawn chanted together, "We care!" with even Dark Heart joining them. He completely lost his evil when Christy woke up and also transformed into a real human being. Vowing to do his part to spread caring and friendship in the camp, Dark Heart joined with Christy, John and Dawn as a new member of the summer camp, after turning into a real boy. It’s unknown what happens to Dark Heart after summer camp is over but it’s assumed that he stays friends with Christy, John and Dawn. 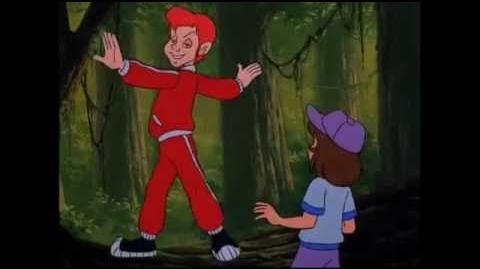 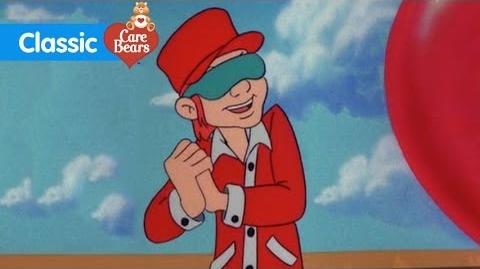