"Oh, great, a stub."
This article is a stub. You can help Care Bear Wiki by expanding it.

Winged heart with a resonating rainbow

Dream Bright Bear is a Care Bear who was created as a plush by Basic Fun! in 2022 to celebrate the franchise's 40th anniversary.

Dream Bright Bear has sky blue fur with a lavender gradient at the bottom of her head, with lavender hair. She also has a star-shaped lavender blush. She has heart-shaped pupils in her eyes and her Belly Badge is a smiling pink heart with sky blue wings with a five striped rainbow resonating from the top of the heart.

Dream Bright is extremely positive, encouraging people to be optimistic and believe in themselves. She believes that people should never give up and that anything is possible.

Dream Bright Bear was first shown on December 31, 2021, being used to promote the new year as a tease; she was also previously teased on their Tiktok, stating that a new bear was coming soon but would not be told. She was officially announced the next day with three separate posts on the Instagram. She was announced again on February 22, along with I Care, and begun to be released that same day.

In animation, she made her debut on March 28, 2022, with "In My Dreams ft. Dream Bright Bear", an edited version of a previous Care Bears: Unlock the Music video made to include her. 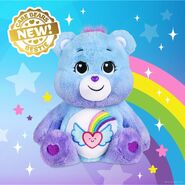 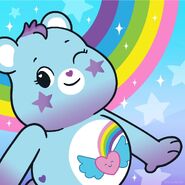 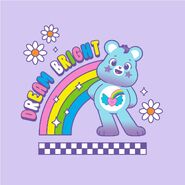 2022-present - Dream Bright Bear is the most optimistic Bear in Care-a-Lot! She's always there to cheer you on and encourage you to follow your dreams. She knows that anything is possible if you try your best and believe in yourself.