(Note: The subject of this article has conflicting sources to their gender. For the purposes of consistency and readability, gender-neutral pronouns will be used to address this character throughout this article due to their neutrality.)

Two crossed yellow flowers with green stems and two leaves on each stem.

Friend Bear (also recently known as Friendship Bear) is one of the ten original Care Bears who appeared on American Greetings greeting cards in late 1982, and has since made numerous appearances throughout the 1980's and 2000's Care Bears franchise.

Friend Bear has peach-colored fur and her Belly badge depicts two intertwined smiling yellow daisies. They also have blue eyes and a darker orange head tuft. Friend Bear's palms and paw pads are a very dark orange. Their face is white with three freckles on each cheek. The fur on their stomach is also white.

If there's one thing Friend Bear knows, it's how to be a pal. They practically wrote the book on companionship, and knows that there's no greater gift in the world than a good buddy to share all of life's ups and downs with. They are willing to stand beside anyone who needs a companion, consort, partner, sidekick, or just plain acquaintance. Friend Bear is the social butterfly of the Care Bear team, and with her around, you're never in danger of being alone.

Friend Bear makes their animated debut in the very first Care Bears 1983 television special. After a boy named Kevin runs away from home, he ends up in the gloomy Land Without Feelings ruled by Professor Coldheart, who turns him into a Green Creature Slave. It's up to Friend Bear and the rest of the crew to defeat the mad professor and return the boy to normal.

In the follow-up to the original TV special, Friend Bear is among the bears who must once again stop Coldheart and his new sidekick Frostbite from tricking a boy named Paul into helping him complete his "Careless Ray Contraption" that will freeze everyone's feelings.

In the very first Care Bears theatrical film, Friend Bear is one of the main characters, alongside new addition Secret Bear.

The two Bears travel to Earth to help two children, Kim and Jason, who feel like they don't need any friends. After Grumpy's Rainbow Rescue Beam malfunctions and transports both the bears and the two children to Care-a-Lot, Friend welcomes them in true Care Bear fashion with a song ("Nobody Cares Like a Bear") before attempting to take them back the same way. When the machine once again goes haywire, Friend, Secret Bear, Kim, and Jason become lost in the Forest of Feelings, where they meet their new friends, the Care Bear Cousins.

When the other bears travel to the forest to look for them, they are finally reunited after meeting the rest of the Cousins, and travel to Earth together to stop The Spirit from removing all caring from the world.

The second Care Bears feature film tells the story of how the bears, including Friend Bear, first arrived in Care-a-Lot after escaping the evil Dark Heart. Later, when the villain propositions a girl named Christy into helping him capture the Care Bears once and for all, Friend and Secret Bear see the two working together to lure the rest of the bears into a trap, and re-group with the few remaining members of the Care Bear Family to help plan their rescue. Together with two children named John and Dawn, the team goes to Dark Heart's lair and free their friends.

Friend Bear makes somewhat infrequent appearances in Nelvana's The Care Bears Family TV series, although quite less than in the DIC series. Once again, they normally appear with Secret Bear, and is one of the few bears who can interpret their pantomimes.

Around 1991, Friend Bear and several other Care Bears received temporary redesigns in both artwork and plush form in order to bring about environmental awareness. Despite appearing in several books and even stickers, this new line was relatively short-lived due to a lack of popularity and low sales.

Friend Bear's appearance for this series featured them with reddish fur with a much different tummy symbol that depicted their typical flowers with the addition of two large overarching trees surrounded by hearts.

Friend Bear is a character in the first computer-animated Care Bears film, Journey to Joke-a-lot. They are one of the Bears who helps out with the Care Bear Fair when Funshine runs away.

In the second CG Care Bears video, Friend Bear's role is minor as in Journey to Joke-a-Lot, although they are still among the residents of Care-a-Lot who welcome their new neighbors, Me Bear, Messy Bear, and Too Loud Bear to the community.

Later in the film, when the new bears abuse the power of Wish Bear's wishing star Twinkers, their greed eventually becomes too severe and Care-a-Lot begins to fall apart at the seems. Its up to the Care Bears, including Friend, to rebuild it in the aftermath.

Friend Bear is one of the playable characters in the 2005 Game Boy Advance video game Care Bears: Care Quest during the minigame "It's Good to Have Friends", where they must float around knocking on other bears' door and match them together based on their toys.

Although Friend Bear doesn't appear in Welcome to Care-a-Lot, they do appear in promotional artwork and in the toy range from Just Play.

As with Welcome to Care-a-Lot, Friend Bear doesn't appear in Unlock the Magic, although artwork done in the show's art style has been used on promotional material, first being used on a "Favorite Care Bear" contest done in March 2020. The character's gender is also changed to male for this series.

Friend also appears in the Unlock the Magic-inspired book Care Out Loud! on an illustration where they are depicted talking to Cheer Bear and Dibble.

Bedtime, Friend, and Tenderheart Bear in The Care Bears in the Land Without Feelings. 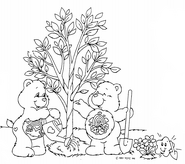 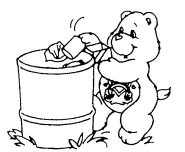 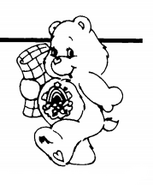 2002-2006: Need a good friend? Friend Bear would love to be your best buddy bear. She's the perfect example of a friend, too. She's caring, likes to play with you and she's fun to be with. She has a friendly symbol on her tummy - two smiling flowers!

Caring Mission: She shows how to be a great friend.
Symbol: Her twin, smiling flowers symbolize the joy of friendship.
Personality: Kind and friendly.
Character Quirk: A real chatterbox, she doesn't always know when to be quiet.
Color: Light Orange.
Best Friend: Love-a-lot Bear
Relationship Challenge: No one-she gets along with everyone!
Motto: Have I got a friend for you—me!

2004 Cub: Friend Cub would like to be your best friend, but she's far too shy even to say hello with your help, however, she'll become the perfect example of a friend - caring, playful, and fun to be with. She hopes you like the symbol on her tummy - a friendly, smiling flower!

20th Anniversary: Everyone can use a good friend in life, and Friend Bear spares no effort to make sure that each of us has at least one. Not only is she a good friend in her own right, but she helps bring people closer to each other, too. Friend Bear's tummy symbol, two smiling daisies, reflects the warmth and closeness of friendship.

The Bears Are Back in Town - The Ultimate Guidebook: Friend Bear believes that there is nothing more important than a good buddy who's there through the good times and the bad. This sweet bear knows how to be the perfect pal in any situation. He's a social butterfly who may talk a new friend's ear off the first time they meet, but it's only because he wants every bear to feel welcomed and wanted.

2021-present: Friend Bear believes that there is nothing more important than a good buddy who's there through the good times and the bad. This sweet bear knows how to be the perfect pal in any situation.