A house in The Land Without Feelings - (Comics)

Frostbite is the dopey bumbling sidekick of Professor Coldheart and the nephew of Auntie Freeze. He enjoys being mean almost as much as his boss.

His first appearance was in The Care Bears Battle the Freeze Machine special, and he later returned in DiC Care Bears series and the 200 issue weekly comic in the UK that spawned several annuals.

He appears to be a short, childlike man wearing general winter clothing, such as a light blue coat, dark blue mittens, belt, and hat, red earmuffs and a scarf, and also grey pants with grey shoes to match. Just like with Professor Coldheart, in the DIC series, his pallet and structure is softer. His face, nose, and eyes are less rough, some colours being brightened, and his general appearance being more rounded and chubby.

In the much later UK produced comics, Frostbite's pallet is purple instead of blue and red, with his attire donning purple colours that sometimes change slightly depending on the comic, with his belt and buckle also usually having some form of contrasting colour.

Frostbite isn't the brightest star in the sky, he speaks in a slow, dopey manner, and most of the time isn't even a threat towards the Care Bears and Coldheart's other targets. Professor Coldheart treats Frostbite poorly, constantly yelling at him when he either messes up, has a terrible idea, or says something that he wasn't supposed to.

In the DiC series, he's noticeably more dopey and not as much of a threat as he was in the Freeze Machine special, as in said special he was allowed by Professor Coldheart to freeze Baby Hugs and Baby Tugs in star shaped ice blocks and do as he pleases with them whilst Coldheart was busy, which could be considered far more cruel. But in the DiC series he's more light hearted, saying and doing certain things that wouldn't be necessarily considered 'evil' by many people. 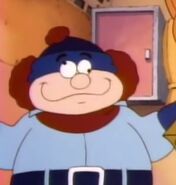 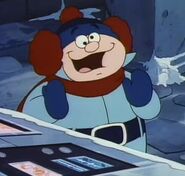 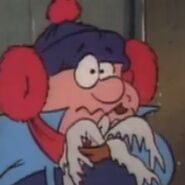 Frostbite's QNA in the Marvel comic
Add a photo to this gallery
Retrieved from "https://carebears.fandom.com/wiki/Frostbite?oldid=26878"
Community content is available under CC-BY-SA unless otherwise noted.