Good Luck Bear is one of the ten original Care Bears who first appeared on American Greetings greeting cards in late 1982. Since then, he has made numerous appearances in various forms of Care Bear media, including movies, TV shows, and books.

Good Luck has green fur with a matching green four-leaf clover belly badge. In his most recent appearance, he has two dark green blotches on both cheeks.

Good Luck is a fortuitous bear that never seems to run out of good luck. However, this has less to do with the fact that he can create his own four-leaf clovers, and more to do with his exceptionally bright, positive outlook on life. Truly believing that there is no such thing as "bad luck", the fortunate fellow tries to help others by improving the power of their own self-confidence and removing all doubt from their heart.

He speaks with an Irish accent in both the original 1985 The Care Bears Movie and 2012's Welcome to Care-a-Lot series, but has an American accent in all other appearances.

In the follow-up to the original TV special, Good Luck is among the bears who must once again stop Coldheart and his new sidekick Frostbite from tricking a boy named Paul into helping him complete his "Careless Ray Contraption" that will freeze everyone's feelings. The Care Bears Battle the Freeze Machine

When a boy named Nicholas makes a pact with a magic book possessed by an evil female Spirit to have great magic power, she tricks him into concocting a spell that will remove all caring from the world. When the Care Bear's home of Care-a-Lot begins to fall apart due to the massive drop in caring energy around the world, Good Luck and Grumpy Bear stay behind to try and fix things while the others travel to Earth to stop the Spirit themselves. After finally getting Grumpy's teleporter device working, (with a little luck), the two join the rest of the bears and their new allies, the Care Bear Cousins, in the final confrontation. The Care Bears Movie

Good Luck makes only one speaking appearance in DiC's Care Bears television series when he and the other bears have to help a girl named Millie, who believes she is jinxed. After giving her a "lucky charm" inside box, he tells her it will improve her luck, but only if she doesn't open. After her luck begins to improve over time, she is able to do things she couldn't before, and it is only then that Good Luck tells her she can look inside, and finds only a picture of herself, meaning she had created her own luck the whole time. Lucky Charm He would later be seen only in background cameos, such as when the Care Bears planned a comedy show to cheer up Cheer Bear and Grumpy Bear, The Last Laugh, and when the bears met the villainous Strato Nefarious, who was stealing the stars from the sky. The Night the Stars Went Out

The second Care Bears theatrical film tells the story of how the bears themselves, including Good Luck, first arrived in Care-a-Lot after being rescued from the clutches of the evil Dark Heart. When the villain once again plans to capture all the denizens of Care-a-Lot, Good Luck is among the many who are imprisoned in his secret lair. With the help of a girl named Christy, he and his friends are freed, and help Dark Heart care enough to transform into a real boy. Care Bears Movie II: A New Generation

After going to Earth on a caring mission with Grumpy and Wish Bear, Grumpy stumbles upon a rare eight-leaf clover, which Good Luck remarks is so rare that actually grants its finder three wishes. Grumpy's Three Wishes

Later, when the Care Bears are cleaning out an attic, they find an old photo album that contains baby pictures of two unknown pandas, who they deduce must be long-lost members of the Care Bear Family. No sooner do they make the revelation when the Caring Meter alerts them to trouble on Earth, with Good Luck, Tenderheart, and Swift Heart Rabbit responding to the call. Upon arriving in a place known only as "The Valley", a verdant paradise in the middle of an icy wasteland, they coincidentally run into the very pandas they had found out about: Perfect and Polite, the latter developing an immediate crush on Good Luck. However, their relationship is short-lived when the pandas find out they don't fit in with the rest of the bears in Care-a-Lot, and return home. Upon arrival, they find that the icy storm has crept into the valley and threatens the lives of the humans who live there. Using the power of their inner love and warmth, the pandas push the storm back, and realize that it was their own inner caring that kept the valley alive in the first place. Polite and Good Luck have a tearful goodbye as the two hope to see each other again someday. The Long Lost Care Bears

Good Luck is one of the main characters in the third Care Bears movie, and travels to Wonderland along with other Care Bears and Care Cousins along with a girl named Alice to help find a missing princess. He becomes part of a team comprised of Swift Heart Rabbit, Brave Heart Lion, and Grumpy Bear, who find the princess in the home of the Stan the Jabberwocky. By freeing her and returning to the palace, they are able to stop the Wizard of Wonderland from ascending to the throne and return Alice home safely. The Care Bears Adventure in Wonderland

Good Luck Bear is one of the playable characters in the 2005 Game Boy Advance video game Care Bears: The Care Quests during the minigame "Lucky Day", where he must float around and drop clovers on other Care Bears to help them avoid obstacles.

In the second CG Care Bears video, Good Luck is among the residents of Care-a-Lot who welcome their new neighbors, Me Bear, Messy Bear, and Too Loud Bear to the community. Later in the film, when the new bears abuse the power of Wish Bear's wishing star Twinkers, their greed eventually becomes too severe and Care-a-Lot begins to fall apart at the seams. It is up to the Care Bears, including Good Luck, to rebuild it in the aftermath. The Care Bears' Big Wish Movie

Good Luck appears in the Care Bears: Oopsy Does It! film as one of the citizens of Care-a-Lot whose Belly Badge is stolen by Grizzle after he tricks Oopsy Bear into helping him. However, when Grizzle attempts to use the combined badges of all Care Bears to destroy Care-a-Lot, he finds that they won't respond to his commands because he simply "doesn't care". Though the orb containing the badges eventually gets destroyed, Good Luck and the other Care Bears hold hands and are able to reclaim their powers by remembering how much they care. Care Bears: Oopsy Does It!

Good Luck makes a few appearances in the 2007-2008 Adventures in Care-a-Lot series, mostly in background roles. A Little Help

His first major speaking role comes in the ninth episode, Luck O' The Oopsy, where he tries to console Oopsy after he becomes depressed about having "bad luck". After seeing Good Luck's Belly Badge, he gets the idea to find a four-leaf clover of his own to improve his chances at an upcoming race. However, when he manages to win the race even after the clover falls out of his helmet at the starting line, he realizes that his misfortune was all in his head this whole time. Luck O' the Oopsy

Good Luck Bear makes minor appearances in the 2009 direct-to-video Care Bears film as one of the citizens of Care-a-Lot. He is seen among the bears who perform in the "I Believe" music sequence, and again at the end of the film during the ribbon-cutting ceremony at the Caring Station's new light-equipped tower. Care Bears: Share Bear Shines

Good Luck Bear re-appears in Care Bears: Welcome to Care-a-Lot. Good Luck sports his Irish accent that had previously been absent since the original DiC episodes. He is seen during the annual Belly Badge Bout competition as a member of the "Bear-a-Lots" with Love-a-Lot Bear, Wish Bear, and Best Friend Bear. He and his team have a rivalry against team Bear Power, made up of Grumpy, Funshine, Harmony Bear, and Share Bear, but spend so much of the episode bickering among themselves that they don't even have time to practice. Cub Bouts

Good Luck is one of the supporting characters in this continuation of the Welcome to Care-A-Lot series.

Good Luck Bear is one of the main characters in Care Bears: Unlock the Magic. He is very similar to his previous incarnations. The biggest difference to the character compared to other incarnations is that he is a main character in this series. He's always ready to help his friends, even without the use of good luck.

2002-2006: Good Luck Bear is loaded with luck and he loves to share it with anyone who can use a little more good fortune. You'll almost always find this bear with a big smile on his face. Even the symbol on his tummy is lucky - a four-leaf clover!

Caring Mission: He shares his good luck with others.
Symbol: His four-leafed clover symbolizes the luck that's always with him.
Personality: Happy and self-confident.
Character Quirk: He can make broken machines work with a snap of his fingers.
Color: Green.
Best Friend: Funshine Bear
Relationship Challenge: Cheer Bear—for some reason, his good luck doesn't work when she's around.
Motto: Lucky for you I'm here!

20th Anniversary: He's the Care Bear who shares his good luck with everyone. He's loaded with luck, and good fortune follows him wherever he goes. Naturally, Good Luck Bear is almost always smiling. You might say he leads a charmed life! Good Luck Bear's four-leaf clover lets us know that when this Bear is nearby, good luck is never far behind.

2020-present: Good Luck Bear is loaded with luck and good things follow him wherever he goes. You might say he leads a charmed life! The four-leaf clover on Good Luck Bear’s belly badge lets us know that when he’s nearby, there’s plenty of luck to go around!

The Bears Are Back in Town - The Ultimate Guidebook: One lucky bear! Good Luck Bear is used to winning every game and having everything handed to him. He's just lucky that way. But now that he's in the Silver Lining, his luck has turned for the worse, and he has to rely on his determination and enthusiasm to get him through each difficult task that he faces. Luckily, Good Luck has his friends by his side to help him along the way. When he's not on a mission to help the Whiffles, Good Luck enjoys completing challenging puzzles, performing his rainbow juggling routine, and joking around with his best pal, Funshine. 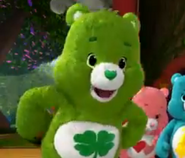 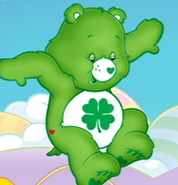 Classic Care Bears - The Evolution of Good Luck Bear!
Add a photo to this gallery
Retrieved from "https://carebears.fandom.com/wiki/Good_Luck_Bear?oldid=27077"
Community content is available under CC-BY-SA unless otherwise noted.