Blue raincloud with small raindrops and hearts beneath.

Grumpy Bear is a Care Bear who made his first appearance as an illustration on American Greetings cards in 1982. He has since become one of the most prominent and recognizable characters in the franchise and has appeared as the main character in nearly every incarnation of the series. This is due to his gruff and reserved demeanour, which when juxtaposed against the bright and cheerful nature of the other bears creates a notable difference in his character, thus allowing him to stand out.

Grumpy Bear has dark blue fur and his Belly badge depicts the easily identifiable image of a storm cloud with hearts or two replacing some of the raindrops. Grumpy is usually depicted with blue eyes as well.

Cynical, surly, and rarely happy, Grumpy is very much the black sheep of the Care Bear Family. While at first, it may seem like he's in the completely wrong line of work, he occupies a very particular niche among his bubbly bear brethren and is often relegated to helping grumpy kids. His personality is fitting to his horoscope, which is Scorpio.

Grumpy is a practitioner of "tough love", taking a more straight-forward approach to solving problems, and isn't afraid to tell it like it is. His special talent is building and fixing machines and is responsible for many of the fantastic devices that the bears use on a regular basis. Anytime any other Care Bear calls him in the middle of his work, he bumps his head by accident. He also once built a functioning robot, Cubot, with Bright Heart Raccoon.

Despite his antisocial traits, he's not above sharing a smile with his friends on special occasions, even if he pretends not to like it.

His belly badge gives him the power to create tangible clouds, which can be used to help him solve any problems he may be facing, although this method is generally only used as a last resort.

The Land Without Feelings

Grumpy Bear makes his animated debut in the very first Care Bears 1983 television special. After a boy named Kevin runs away from home, he ends up in the gloomy Land Without Feelings ruled by Professor Coldheart, who turns him into a Green Creature Slave.

In the follow-up to the original TV special, Grumpy is among the bears who must once again stop Coldheart and his new sidekick Frostbite from tricking a boy named Paul into helping him complete his "Careless Ray Contraption" that will freeze everyone's feelings.

Grumpy appears in the very first Care Bears theatrical film trying to complete his latest invention, a teleportation device called the Rainbow Rescue Beam. However, when Baby Hugs and Tugs play with the machine, they cause it to malfunction and accidentally bring two children named Kim and Jason to Care-a-Lot.

After attempting to send the two back, the device once again goes haywire and sends the two kids, along with Friend Bear and Secret Bear to the mysterious Forest of Feelings.

While the rest of the bears go look for them, Grumpy and Good Luck Bear stay behind to try and fix the Rescue Beam as Care-a-Lot crumbles around them due to the action of the Evil Spirit.

After rigging together the device with some odds and ends, the two are able to teleport to Earth and join their comrades in a stand-off against The Spirit and are able to seal her away in the end.

The second Care Bears feature film tells the story of how the Care Bear Family, including Grumpy, who played a major role in getting an important key, first arrived in the Kingdom of Caring, after escaping the nefarious Dark Heart. Sometime later, the villain once again attempts to capture his fuzzy prey with the help of a girl named Christy, who tricks the bears into trying to rescue her while Dark Heart catches and imprisons them.

Grumpy is one of the few remaining bears who must mount a rescue mission along with two children named John and Dawn. When the team arrives in Dark Heart's lair, they are joined by Christy who laments her actions and helps the rest of the crew to get the evil shape-shifter to care.

Grumpy is one of the main Care Bears featured in Nelvana's Care Bears Family television series.

When the White Rabbit of Wonderland comes to Care-a-Lot looking for a lost princess, he gives Grumpy a rude awakening by arriving through his mirror. After a search on Earth turns up nothing, they instead find a girl named Alice who looks nearly identical to the missing royalty and decide to take her to Wonderland instead. Grumpy joins a group comprised of Good Luck Bear, Brave Heart Lion, and Swift Heart Rabbit to look for the real princess while the others escort Alice to Wonderland Palace to take her place in the meantime. After saving the princess from Stan the Jabberwocky, he and the rest manage to get her to the palace in time to keep the Wizard of Wonderland from being crowned king.

In the final original series television special, Grumpy and Funshine go to Earth to help a girl named Anna feel better after her best friend moves away. However, when a portal to Toy Land opens in her home and releases both a Nutcracker and a horde of rats, he and Funshine call for help and re-group with other Care Bear Family members before entering the other realm. Together with Anna and the Nutcracker, Grumpy and the rest must stop the Vizier from ruling all of Toy Land.

Grumpy Bear is a major character in the first computer-animated Care Bears film, Journey to Joke-a-lot.

Grumpy is first seen setting up the Rainbow Carousel for the Care Bear Fair. However, his poor fixing skills causes it to go out of control and fall into pieces. All the Care Bears are all dazed, but Funshine Bear enjoys it, and jokes about it. Grumpy is furious and upset about it, and demands Funshine that his humor doesn't belong in Care-a-Lot. After Funshine runs away to Joke-a-Lot, the other Bears are grim with Grumpy for making Funshine leave and demand that he apologises the next time he sees him.

Eventually, Grumpy is made to go with Tenderheart, Cheer, Share and Wish to Joke-a-Lot, and he eventually apologises to Funshine for his actions.

When Sir Funnybone begins to escape Joke-a-Lot in a hot-air balloon, Grumpy fixes up his Carousel, with the Bears and Gig using the spinning feature they used before to pop Funnybone's balloon and defeat him once and for all.

In the second CG Care Bears video, Grumpy Bear is among the residents of Care-a-Lot who welcome their new neighbors, Me Bear, Messy Bear, and Too Loud Bear to the community.

Later in the film, when the new bears abuse the power of Wish Bear's wishing star Twinkers, their greed eventually becomes too severe and Care-a-Lot begins to fall apart at the seams. It's up to the Care Bears, including Grumpy, to rebuild it in the aftermath.

Grumpy Bear appears in the Care Bears: Oopsy Does It! film as one of the citizens of Care-a-Lot whose Belly Badge is stolen by Grizzle after he tricks Oopsy Bear into helping him.

Grumpy is one of the main five recurring Care Bears in the series. He is an inventor and has invented all sorts of gadgets to make the Care Bears' lives easier. In this series, Grumpy has scruffy, rounded hair and is the shortest Care Bear out of the main five.

Grumpy has a few episodes where he has a starring or a major role:

Welcome to Care-a-Lot and Care Bears and Cousins

Grumpy is one of the main characters in Care Bears: Welcome to Care-a-Lot. Grumpy lives in his Van at the Moody Mountains. He usually carries a bag to get everything he needs. He also talks in some sort of western accent in this series.

Grumpy Bear is the main character in Care Bears: Unlock the Magic. Similar to his previous incarnations, Grumpy is a grouchy worrywart, as well as the team mechanic. He is also responsible for building the Cloudseeker. He's a good-hearted guy, just tone-deaf to his own words. His little Whiffle friend, Dibble, loves him very much.

2002-2006: Grumpy Bear frowns a lot - that's his way to show us how silly we look when we frown too much. He also shows that it's okay to be grumpy sometimes. But even when we're grumpy, we're still loved, and we're reminded of that by Grumpy Bear's symbol - a rain cloud with heart-shaped raindrops.

20th Anniversary: Grumpy Bear is a bit of a grouch. But his grumpiness reminds us that an occasional grouchy mood is all right - as long as it doesn't last too long. Grumpy Bear's tummy symbol, a rain cloud with falling hearts, is a reminder that even when we are grouchy, we are still loved by those closest to us.

2007-2011: If Grumpy Bear likes anything, it's tinkering with his new inventions and using all his tools. Grouchy and often complaining, Grumpy likes to makeup 'grumbly' nonsense words to express his moody blues. But don't be fooled. Beneath his frown and gloomy rain cloud, he has a heart of gold.

2012-2018: Grumpy Bear frowns a lot - that's his way of showing us how silly we look when we frown too much. He also proves that it's okay to be grumpy sometimes. But even when we're grumpy, we're still loved, and Grumpy Bear's belly badge is a reminder of that - a rain cloud with heart-shaped raindrops!

2020-present: Grumpy Bear may be a bit of a grouch but his grumpiness reminds us that it’s okay to be grumpy sometimes – as long as it doesn’t last too long.  Grumpy Bear’s tummy symbol — a rain cloud with falling hearts — is a reminder that even when we’re less than cheery, we are still loved by those closest to us.

The Bears Are Back in Town - The Ultimate Guidebook: When he isn't tinkering with his latest inventions, Grumpy Bear can be found cooking or spending time with his newest pal, Dibble, a tiny Whiffle the team found while they were looking for Funshine. Grumpy is always making improvements to his invention, the Cloudseeker, which is the main vehicle for the Care Bears on their mission in the Silver Lining. He is sometimes a tad overprotective of the Cloudseeker, but he has come to terms with sharing it with the team and that it may even get a scratch every now and again. At times he can come off as a bit grumpy on the outside, but this loveable bear has a good heart on the inside. 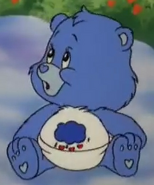 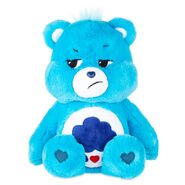 The most current Grumpy Bear plushie available for sale. 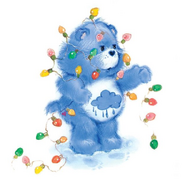