Harmony Bear is a Care Bear who made her debut in the original 1980's Care Bear franchise. She first existed as both a UK and Australian-exclusive toy in the mid-1980s and has since been included in several international Care Bear-related media beginning with the second film in 1986.

Harmony's name is meant to have a double meaning. Not only does she exemplify unity and togetherness between people of all kinds, but she loves to spread the joy of music and sound. Fortunately, both goals are not mutually exclusive, and she often uses her songs and melodious voice to bridge gaps that language cannot.

While she always has violet fur, her Belly badge has changed numerous times throughout the years, beginning as a rainbow music note, then a red heart with two small pink hearts, and currently, a smiling rainbow flower.

Harmony Bear made her debut in the original 1983-1986 Care Bears toyline. She was first released as a UK/Australian-exclusive plush, with slightly lighter fur and a modified Belly Badge that depicted a rainbow-colored triple music note.

When Harmony was released internationally, her Belly Badge was changed to a Red heart.

Due to their rarity and relatively limited market, toys of these particular versions of Harmony remain valuable items for collectors.

Harmony made her animated debut in the second Care Bears theatrical film, which tells the story of how the Care Bears first arrived in Care-a-Lot as cubs after escaping the evil Dark Heart. Sometime later, a grown-up Harmony is seen helping the other bears prepare for the return of True Heart Bear and Noble Heart Horse from a caring mission, and has a run-in with the villain when he arrives disguised as the Caring Meter Reader.

After Dark Heart propositions a girl named Christy into helping him capture most of the Care Bear Family, Harmony is among the few bears left to mount a rescue mission, with the help of two children named John and Dawn.

After being absent from Journey to Joke-a-Lot, Harmony appears in the second Care Bears CGI feature.

When Wish Bear wishes for new neighbors who love wishing as much as she does, she ends up heralding the arrival of three troublesome bears - Me Bear, Messy Bear, and Too Loud Bear - who begin to grate everyone's nerves. Harmony Bear is among the bears whose picnic is ruined by their wild car ride, and when the trio begin to abuse the power of wishing for their own benefit, Care-a-Lot begins to fall apart at the seams.

In order to get everything back to normal, it's up to all the bears, including Harmony, to help clean up.

Care Bears: Oopsy Does It!

Harmony appears in the Care Bears: Oopsy Does It! film as one of the citizens of Care-a-Lot whose Belly Badge is stolen by Grizzle after he tricks Oopsy Bear into helping him.

Like most Care Bears, Harmony receives a slight redesign in Adventures in Care-a-Lot, now sporting a pink headband with a small flower that resembles her Belly Badge. As the lead vocalist of Care Bear Honeys, she also runs Sweetheart Candy Parlor, a candy shop that is featured in a few episodes.

In the toy range and merchandise, Harmony has a gold-colored headband instead of a pink one, including her official artwork.

Harmony is one of the main characters in the 2012 animated series Care Bears: Welcome to Care-a-Lot. Harmony has a tendency to "sing" her lines rather than just speak them and has the ability to make up tunes on the fly to fit any situation. She also owns a stage, where she performs concerts for the other Care Bears.

Harmony is once again a main character in the sequel series to Welcome to Care-a-Lot.

Harmony is a minor character in Care Bears: Unlock the Magic, being one of the few Bears to stay in Care-A-Lot on Caring Control.

She makes a major appearance in The Big Whifflesnooze.

She also has a minor, non-speaking cameo appearance in Festival of Hearts, as-well as a flashback cameo in On the Trail of the Cloud Bouncer.

2002-2006: Harmony Bear helps others get along. This peace-loving bear knows our differences are something to be celebrated, not something to keep us apart. When differences are brought together in harmony they create something beautiful. That's the meaning of her symbol - a smiling flower with different colored petals.

Caring Mission: Helps others overcome differences and get along.
Symbol: Her smiling flower symbol shows the beauty and happiness that comes from getting along with those around us.
Personality: Open and friendly.
Character Quirk: She's got a beautiful singing voice that seems to magically help calm others when they're upset.
Color: Lavender.
Best Friend: Friend Bear
Relationship Challenge: Champ Bear (He can be so competitive sometimes.)
Motto: Good times get better when we get along together!

2007-2011: Like the different colors of a rainbow, different kinds of people can join together to make something beautiful. That's what Harmony Bear believes. She helps others get along and play well together. Her bright flower belly badge shows this, too. Each petal of the pretty flower is a different color! 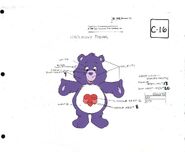 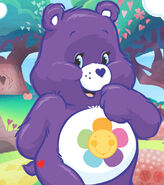 
Retrieved from "https://carebears.fandom.com/wiki/Harmony_Bear?oldid=28768"
Community content is available under CC-BY-SA unless otherwise noted.