Heartsong Bear is a Care Bear who debuted as a plush toy in 2006.

The "star" of the Care Bear crew, Heartsong believes that everyone should always put their best feelings. Or, falling that, compensate with a really noisy microphone. While this musical bear may spend most of her time singing, dancing, or just performing, she's not as self-absorbed as one might think. No, she also sees others as blank stages just waiting to be turned into living sounds of music by her expert singing techniques. To her, the path to feeling good inside starts from the outside.

Her fur is teal blue, and her Belly badge is a rainbow-colored musical note surrounded by five different colored hearts.

Heartsong made her debut in 2006 during the Care Bears relaunch toyline. She was made available in several varieties, including comfy vanilla-scented plush, "troll hair" plush, and 8" and 12" varieties. Her 12" variant came packaged with a Care Bears Family DVD.

Heartsong received a redesign only a short time after her debut to emulate the style of characters from Adventures in Care-a-Lot, now wearing her hair tied up in a ponytail. Her belly badge was also simplified to include a plain rainbow-colored musical note with a white heart inside with surrounded by three different colored hearts.

Heartsong doesn't appear in Welcome to Care-a-Lot, although she does appear in the show's merchandise.

Just Play released a 14-inch "Crystal Eyes" plush of her in 2017, while HeadStart International released a Dancing toy of the character in 2019. 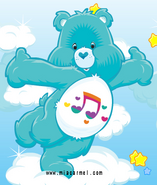 2006-2007: There's always music in the air for Heartsong Bear. This lively bear loves every kind of music and she loves the way music helps us communicate and get in touch with our feelings. She can turn almost any feeling or sound into a song. Her symbol? Heart-shaped music notes, of course!

2007-2010: Heartsong Bear knows that music is a wonderful way of sharing our feelings. She finds music in the many sounds around us and in the warm feelings of her heart. She loves music and the happiness it brings, and this shows in the cheerful music notes on her belly badge.

2020-present: Give Heartsong a beat, any beat, and this Bear will dance all night long! Often communicating through songs and their lyrics, this musical Bear has a knack for knowing the right medley for any situation. Heartsong's constant upbeat attitude lifts her friends’ spirits and encourages them to dance away any worries they may have. Even if the music stops, Heartsong will hum her own tune and keep on groovin’.

In other languages:
Japanese: ハートソングベア

Retrieved from "https://carebears.fandom.com/wiki/Heartsong_Bear?oldid=27097"
Community content is available under CC-BY-SA unless otherwise noted.