I Love You Bear

Handed out during charity events (Mid 1980's)
I Love You Bear was a limited edition bear that was only made as a plush in the original 80's toyline.

She was a UK exclusive that was given out to childhood-based charity groups. There are multiple variants of this plush that were released.

She has golden yellow fur and her symbol is of a red heart with the words "I Love You" written out on it. In the original release of her plush, she had a completely white belly with the heart being a plastic clip on located around the upper right of her chest. The letters of this version where written in white.

Eventually, a different version was produced that gave her a standard belly symbol. This new addition had the letters written in yellow, as well as there being a yellow border around the heart. 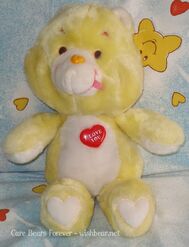 The first variant with the clip-on heart. (Note the different tummy shape.) 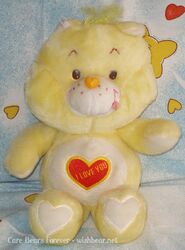 The second variant with the more standard badge.
Add a photo to this gallery
Retrieved from "https://carebears.fandom.com/wiki/I_Love_You_Bear?oldid=24839"
Community content is available under CC-BY-SA unless otherwise noted.