Laugh-a-Lot Bear is a Care bear who made her first appearance as a plush toy in the 2002-2006 franchise relaunch. Since then, she has made sporadic appearances throughout other Care Bears-related media beginning with the 2004 film Care Bears: Journey to Joke-a-lot. She has deep orange fur and her Belly badge depicts a yellow smiling star with its tongue sticking out. It's first used in a care bear sing along toy. Laugh-a-Lot doesn't have to be a doctor to know that laughter is the best medicine. According to her, there's no situation that can't be improved by looking at the humerus side, and sometimes laughing in the face of adversity is the best way to overcome it. Because laughter is infectious, she stays giddy most of the time, hoping that her happy-go-lucky attitude will rub off on others.

2003-2006: There's always something funny going on wherever Laugh-a-lot Bear is. This silly bear gets everything mixed up but turns her little misfortunes and mistakes into lots of laughter for others. Her symbol shows what she really is - a star at giving others the giggles.

Caring Mission: Helps people laugh.
Symbol: Laugh-a-lot Bear's laughing star shows that she is a star at starting laughter.
Personality: Silly and giggly.
Character Quirk: She has a magically contagious giggle that can make others laugh for no real reason.
Color: Deep Orange
Best Friend: Love-a-Lot Bear
Relationship Challenge: She likes Funshine Bear, but oddly, she never seems to get his jokes.
Motto: Get some giggles going! 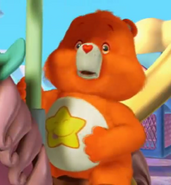 Laugh-a-Lot's 2012 website appearance.
Add a photo to this gallery

Retrieved from "https://carebears.fandom.com/wiki/Laugh-a-Lot_Bear?oldid=25595"
Community content is available under CC-BY-SA unless otherwise noted.