A pair of red and pink hearts

Love-a-Lot Bear is one of the ten original Care Bears that was created by the American Greetings Cards.

She has bright pink coloured fur and her belly badge is two joined red and pink hearts. The red heart has a pink outline and the pink heart has a Yellow outline. In Care Bears: Adventures In Care-a-Lot, she has a short ponytail tied in a clip (with hearts) and a purple scarf.

Love-a-Lot is a kind bear that loves everything, and everyone. She has the propensity to use the word "love" itself in most of her speech. Love-a-Lot shares a similar personality with the rest of the bears.

Love-a-Lot's special task is to help spread love (similar to Cupid). Like the other Care Bears, she can use the Care Bear Stare.

The Land Without Feelings

Love-a-Lot Bear makes her animated debut in the very first Care Bears 1983 television special. After a boy named Kevin runs away from home, he ends up in the gloomy Land Without Feelings ruled by Professor Coldheart, who turns him into a Green Creature Slave. It's up her and the rest of the crew to defeat the mad professor and return the boy to normal. The Care Bears in the Land Without Feelings

In the follow-up to the original TV special, Love-a-Lot is among the bears who must once again stop Coldheart and his new sidekick Frostbite from tricking a boy named Paul into helping him complete his "Careless Ray Contraption" that will freeze everyone's feelings. The Care Bears Battle the Freeze Machine

Love-a-Lot Bear appears in the first Care Bears theatrical film as one of the bears who welcomes the children Kim and Jason to Care-a-Lot during the "Nobody Cares Like a Bear" song sequence. She is later part of the crew of the ship The Cloud Clipper as they travel through the Forest of Feelings looking for their lost friends. After re-uniting with their wayward comrades, and joining forces with the Care Bear Cousins, the group travels to Earth to combat the evil Spirit and seal her away for good. The Care Bears Movie

The second Care Bear feature film tells the story of how the Care Bear Family, including Love-a-Lot first arrived in Care-a-Lot after they escaped capture by the evil Dark Heart. When the villain later propositions a girl named Christy into helping him finally capture his fuzzy prey once and for all, Love-a-Lot is among the few remaining members not to be imprisoned, and must formulate a plan along with two children named John and Dawn to rescue his friends. After arriving at Dark Heart's secret lair, they and Christy are able to free the others and convince Dark Heart to care himself, transforming him into a real boy. Care Bears Movie II: A New Generation

Around 1991, Love-a-Lot Bear and several other Care Bears received temporary redesigns in both artwork and plush form in order to bring about environmental awareness. Despite appearing in several books and even stickers, this new line was relatively short-lived due to a lack of popularity and low sales.

Love-a-Lot Bear's appearance for this series featured her with darker pink fur with a much more complex heart tummy symbol that depicted her typical two hearts with the addition of a rainbow and a field.

2002-2006: Love-a-lot Bear believes in the power of love, but is not afraid to help it along. She's a pretty and perky bear who loves everything about love and tries to make it grow wherever she goes. Love-a-lot Bear loves her tummy symbol too - two hearts!

Caring Mission: She helps spread love.
Symbol: Love-a-lot Bear's two intertwined hearts stand for the closeness and loyalty of true love.
Personality: Spunky and energetic.
Character Quirk: Like cupid's arrow, she can create a crush in no time. She can bring the most unlikely couples together.
Color: Pink.
Best Friend: Friend Bear
Relationship Challenge: She has a bit of a crush herself, on Tenderheart Bear. (Different from Adventures in Care A Lot the animated show from CBS she had a crush on Funshine Bear)
Motto: Love will find a way, and if it doesn't, I will!

20th Anniversary: There's a lot of romance in Love-a-lot Bear's job - she brings lovers together. She's usually spunky and lighthearted, the embodiment of the spirit of first love. She's a true believer in the power of love but is not afraid to help it along. The two hearts intertwined on Love-a-lot's tummy reinforces this Bear's role as the promoter of romance.

2004 Cub: Like the cute and cuddly baby bear she is, Love-a-lot Cub loves to be doted on day and night. Consider it practice, however, for Love-a-lot Cub is still learning all about the love she'll soon be spreading wherever she goes. That's why her tummy symbol has two smiling hearts - one for you and one for her!

2007-2011: Love and happiness are in the air, thanks to a cutie called Love-a-lot Bear! She's a super little sweetheart who's all about love. She puts her heart into everything she does, especially bringing people together. Her belly badge, two pink hearts sitting side by side, shows this perfectly!

She saves herself by holding onto the twin balloons she has made. 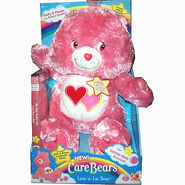 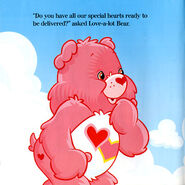 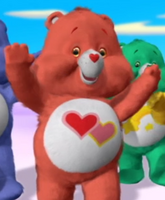 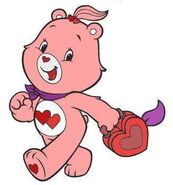 Love-A-Lot Bear as a cheer leader. 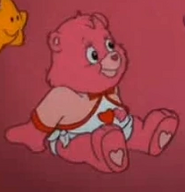 Love-a-Lot in the new Unlock the Magic series

Love-A-Lot Bear in the A New Generation song, Growing Up.
Add a photo to this gallery

Retrieved from "https://carebears.fandom.com/wiki/Love-a-Lot_Bear?oldid=23282"
Community content is available under CC-BY-SA unless otherwise noted.