Nicholas Cherrywood is a human boy and the former secondary antagonist of The Care Bears Movie.

He was the assistant for The Great Fettucini, until one day when he was manipulated and deceived by the evil spirit causing him to slowly become evil himself. However, by the end of the movie, Kim and Jason got him to care again, and he reverted back to his old self. The Great Fettucini then promoted Nicholas from assistant to a full-fledged partner.

Years later, when Nicholas became a full-grown man, he married Kim. Out of remembrance of their own childhood hardships and respect for the Care Bears, they manage an orphanage.

At the beginning of the movie, he wants nothing more than to make friends. However, The Spirit convinces him that what he really wants is for everyone else to be uncaring so they can be lonely just like him.

Unlike other Care Bear villains, he is actually hesitant to spread evil and uncaring, and has to be convinced by The Spirit to continue.

When The Care Bears finally confront him, he is completely under the influence of The Spirit, and has turned evil, that is, until Kim and Jason tell him they used to be like him, and offer to be his friends, the one thing he wanted most, at which point he reverts back to his old self and turns on The Spirit.

As a child he is a young blond boy, who appears to be tall. He is probably close to ten or twelve years old.

As an adult his hair is gray, and he wears square shaped glasses.

Nicholas turning against The Spirit 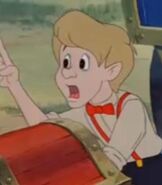 Add a photo to this gallery
Retrieved from "https://carebears.fandom.com/wiki/Nicholas_Cherrywood?oldid=27084"
Community content is available under CC-BY-SA unless otherwise noted.