Varies, but it's usually a Drawn on Smiling Shooting Star holding a red heart

Ashleigh Ball
Oopsy Bear is a Care Bear who was first introduced as the titular character of the 2007 computer-animated film Care Bears: Oopsy Does It!. He has since appeared alongside the other bears in the toyline and is one of the main characters of the 2007-2008 television series Adventures in Care-a-Lot.

Unique among all Care Bears, he does not have his own Belly badge and thus possesses no special powers of any kind, but he will often draw a yellow shooting star on his stomach with a marker. His fur is bright green.

Klutzy and accident-prone, Oopsy is constantly making mistakes, or "oopsies" (Glitches in the Hebrew dub), which continually affect himself and others. Not only that, but he is the only bear in Care-a-Lot to lack a Belly Badge, meaning he has no extraordinary abilities to speak of. While at first, it may seem like poor Oopsy is doomed to spend his life in second place, his true potential begins to shine through as he overcomes his own disabilities, often putting forth more effort and dedication to solving problems as they arise. His unique and practical approaches have saved the day multiple times, especially in situations when the other bear's powers have been nullified in some way. He is often seen palling around with his robot friend Wingnut.

Oopsy with the Care Bears logo on with belly, from the opening song

Oopsy is happy and draws a smiley face on his belly.

Oopsy draws a swirl on his stomach when he's feeling nauseous.

Oopsy draws a flower on his stomach before helping Share with her garden.

Oopsy draws a balloon on his stomach while telling the story about his balloon accident.

Oopsy shows how "handy" he can be to Harmony.

Oopsy refuses to let other bears into his club and draws an X symbolizing their rejection.

Oopsy is sad and draws a frowny face on his belly. 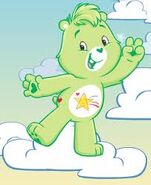 Oopsy Bear is eager - eager to please, eager to help, and eager to get his own belly badge. So eager that he often draws one on his belly himself! Too bad he's always clumsy and bumbling... and always saying "Oopsie!" But make no mistake - Oopsy is 100% Care Bear at heart.

Retrieved from "https://carebears.fandom.com/wiki/Oopsy_Bear?oldid=27098"
Community content is available under CC-BY-SA unless otherwise noted.