The Care Bears in the Land Without Feelings (1983)

Les Lye (specials only)
Len Carlson (DiC series)
Family:
Professor Coldheart is the Care Bears' first true villain, appearing in the the franchise's animated debut television special, The Care Bears in the Land Without Feelings in 1983. He is also the primary antagonist of the 1985 DiC-produced Care Bears cartoon series, appearing in several episodes alongside his sidekick Frostbite, who more or less carries out the professors evil deeds.

He resembles an old blue-skinned frostbitten man with white hair and eyebrows, also wearing a scarf and a blue coat, which also has white furry pockets and cuffs resembling snow. This same fuzzy white material also appears on his boots, which are black and match the colour of his pants.

Despite his scarf appearing to be grey and white in the Atkinson Film-arts produced Care Bears specials, it changes to red and white in the DIC produced cartoon series from 1985. Another few slight changes were made to Coldheart's design too, such as his face, pallet, and structure becoming softer, and giving him a few extra tuffs of hair on his head. And underneath his coat, he wears a blue shirt with suspenders.

His colour pallet sometimes varies, such as in the comics. In one instance, his scarf was green, and in another instance, his boots were red instead of black.

Having an intense dislike of anything warm and caring, he is naturally the enemy of everything the "Fuzzy-Wuzzies" stand for, and will stop at nothing to make the world a more horrible place to live in, what is great fun for him. Reveling in others' misfortune, this icy charlatan goes out of his way to make people unhappy, and is not above employing children to do his dirty work for him.

He is deceitful, tricking children into helping him with his evil schemes. He is also surprisingly energetic for his age.

In the DiC cartoon series, he is not particularly sinister, and is somewhat of a comical villain. Oftentimes his plans are silly in nature, such as when he tried to cover a local town in cement.

In The Land without Feelings, however, he turns children into his slaves, and tries to kill the Care Bears, both of which would be considered far more sinister (and frightening in the case of enslaving the children) than his light-hearted comical shenanigans in the series. It is possible that he was intended to be a much more sinister character, but was toned down for the TV series due to concerns that children might be frightened by the character.

He is both a skilled inventor and wielder of ice-based powers.

Coldheart makes his debut appearance in the very first Care Bears TV special, where he occupies a run-down mansion in the gloomy Land Without Feelings. When a boy named Kevin runs away from home, he winds up at the mad doctor's estate, who promptly transforms him into an emotionless Green Creature Slave, which looks like a frog. When the Care Bears arrive to investigate, they must make their way through the perilous environment out of Coldheart's home, including a living forest and large muck pits, with each bear becoming incompacitated one by one until only a few remain. When Wish Bear wishes that they were at his lair already, the team is magically transported inside his chambers, and are able to turn Kevin and other lost children back to normal with a Care Bear Stare. The Care Bears in the Land Without Feelings

The icy professor makes a reappearance in the second television special, this time joined by his new assistant Frostbite. After his newest invention, the "Careless Ray Contraption" breaks down, he tricks a tech-savvy boy named Paul into helping him repair it with the promise that he'll use it to help him get back at some bullies. In reality, however, he intends to freeze the entire town and everyone in it. When the Care Bears arrive on the scene, they are at first unable to convince Paul that he should succumb to revenge, but the boy has a change of heart of witnessing a test firing of the device.The Bears are able to destroy the machine in the end and thaw out the town using a Care Bear Stare, leaving Coldheart to make a hasty retreat. The Care Bears Battle the Freeze Machine

Coldheart becomes the primary villain of DiC's Care Bears animated series, first appearing in the ninth episode "Forest of Misfortune". Here, he attempts to cover the entire Forest of Feelings in ice using his new freeze gun while distracting the Care Bears and Care Bear Cousins with a phony fortune-telling machine, but they eventually catch on to his trick and turn everything back to normal. Forest of Misfortune Later, he and his equally icy partner in crime Auntie Freeze acquire a magic mirror that they intends to use to reverse the emotions of the bears make them all "uncaring." However, when the mirror is used on Grumpy Bear, he becomes overly happy and helpful, and is able to turn everyone back to normal, thanks of making him so cheerful and goodwilled, which wasn't the intention of the evil Professor. Magic Mirror

When some of the Care Bear Cousins bring a girl named Melanie to the Forest of Feelings to help her get over her constant daydreaming, Coldheart uses this opportunity to have Frostbite (disguised as "Cheatin' Heart Weasel") lure the remaining cousins into a trap, intending to capture the rest of them as well. When all but Swift Heart Rabbit and Melanie end up being caught, they work together to steal Coldheart's remote control to the cage and escape. Daydreams The mad doctor would later attempt to kidnap a group of children and use a device to steal their warmth, but was once again foiled by a combination of the bears and cousins. When his warmth-sapping machine exploded, he even temporarily turned good, but just as quickly became disgusted with his actions. Runaway

After rigging a children's contest to become mayor of a small town for a day, Coldheart wins the election and begins to impose his evil ways over all the citizens, including encouraging children to cheat and steal. The bears arrive and are quickly thrown in jail until Bedtime Bear bails them out after putting Frostbite to sleep, and the team is able to rally the rest of the town against the maniacal mayor. Mayor for a Day He later tries to cover an entire town in concrete using an airplane and tricking a girl named Susie into helping him, but his assistant Frostbite distracts Coldheart by pointing out a different airplane, soon causing their own to fall and crash. Concrete Rain

His final caper occurs during his plan to have a fake wedding to Auntie Freeze in the Care Bear's Hall of Hearts and use a special pipe organ that emits destructive sound waves to destroy it from the inside. During the ceremony, he orders Frostbite to play the instrument as the Care Bear's home crumbles around them, but when his henchman eventually chickens out and runs for it, Gentle Heart Lamb is able to play another song that puts the building back together. Auntie Freeze, unaware that the whole thing was just another one of Coldheart's plans, drags him back to his castle promising revenge. Wedding Bells

Caring is what counts

In the fourth book from the original "Tales from the Care Bears" series, Professor Coldheart makes his first appearance in a novel called "Caring is what counts". In this book, a boy named Kevin runs away because he has to move from his best friend, just like in The Land Without Feelings. But unlike the special, Coldheart himself approaches the child as he's walking towards a fountain and introduces himself to the boy. Afterwards, the Professor demonstrates how he's unable to feel anything by allowing Kevin to pinch his hand, to which Coldheart doesn't feel. Professor Coldheart then tells the boy how great it is to not feel a thing and then offers Kevin a drink from the fountain which turns out to be a formula the mad professor has been working on which removes people's feelings. The Care Bears soon arrive on the scene and Grumpy Bear approaches the professor, he also tries to offer him a drink but Grumpy refuses and tells Coldheart off by saying it's a horrible idea and won't help anyone, the professor then makes fun of Grumpy Bear which upsets him badly, to which the other Care Bears step in and stop Coldheart, also returning Kevin back to normal in the process, the professor then flees from the scene and promises to return.

The Care Bears and Professor Coldheart

In a UK based Care Bears book written by John Gatehouse, Professor Coldheart is the villian of the story as a boy named Ian runs away due to now having a baby sister. The evil Professor then abducts Ian and traps him in a machine which looks like a giant ice cube, but before he could remove the child's feelings, the Care Bears arrive and stop him.

The Care Bears and the Ice Dragon

Another book created by the same people who made 'The Care Bears and Professor Coldheart' features the Professor with a new assistant called 'Coldsnap the Ice Dragon'. Coldsnap turns summer into winter and freezes everything and everyone's feelings, including the Care Bears. Bedtime Bear then unfreezes the bears and they all stop the dragon, and it is revealed that Coldsnap only helped Professor Coldheart so that he would like him.

While he doesn't appear in the actual 20-issue Care Bears comic series itself, Professor Coldheart is featured in a UK produced 100 issue weekly comic, and a mini comic story included in the anthology collection Star Comics Magazine #5 titled "Cool it, Coldheart!"

After watching a wrestling match where a fighter wins by using his opponent's own weight against him, the pesky professor gets an idea to beat the Care Bears at their own game. After using his freeze ray to give children popsicles and an ice-skating lake in the middle of summer, they begin to like him even more than the Care Bears themselves, and won't listen to them when they claim it's just another one of his tricks. Share Bear later gets an idea to have a television crew interview him on his new philanthropic efforts, but he ends up running away in fear when they arrive, saying he'll be the laughing stock of the villain community if word got out that he was actually being nice.

In issue 76, Professor Coldheart hijacks a post office and freezes the van that was about to send thousands of letters that were written by children to the Care Bears. The bears themselves soon arrive on the scene and use a Care Bear Stare to melt the ice that trapped the van in the first place. The Care Bears soon remember that they won't be able to answer all of the letters due to how busy they are, so Tenderheart Bear asks Coldheart to do it instead. The Professor doesn't want to do it at first, but after a bit of dialogue, he agrees, as he'd be able to turn the children all nasty and give them bad advice. A few pages later, it's seen that he's completely taken over the letter section of the comic. 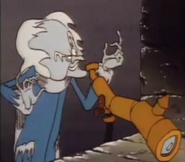 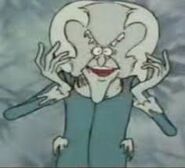 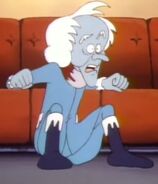 Professor Coldheart in the book adaption of the Freeze Machine special 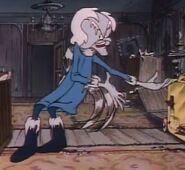 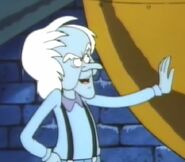 Coldheart without his coat.

Professor Coldheart after taking over the letters section of the Care Bears Marvel comic in issue 76
Add a photo to this gallery
Retrieved from "https://carebears.fandom.com/wiki/Professor_Coldheart?oldid=25831"
Community content is available under CC-BY-SA unless otherwise noted.