(Note: The subject of this article has conflicting sources to its gender. For the purposes of consistency and readability, feminine pronouns will be used throughout as they are the most recent pronouns to be used in reference to Secret Bear.)

Secret Bear is a Care Bear who made her animated debut in The Care Bears Movie in 1985, and has since made numerous follow-up appearances in several forms of Care Bear media.

She originally had tangerine/orange-colored fur, which was changed to magenta from her 2000s toy appearance onward, and her Belly badge is a red heart-shaped padlock.

Secret Bear is not what one might refer to as "talkative". Secret Bear only confides in her closest friends, and the only sound she gets across is in whispers. When she has to get her point across, she does so either by pantomime or charades, leaving everyone else to interpret her message the best that they can.

Secret Bear makes her animated debut in the very first Care Bears film. Starting from this film to Care Bears Family, she used masculine pronouns. Here, she and Friend Bear travel to Earth to help two children named Kim and Jason who feel like they don't need any friends. When a test of Grumpy Bear's new Rainbow Rescue Beam accidentally brings the kids to Care-a-Lot along with the bears, they welcome them with a song before attempting to send them back the same way. However, the device malfunctions yet again, sending Kim, Jason, Secret, and Friend Bear to the Forest of Feelings, where they meet their new friends, the Care Bear Cousins.

When the rest of the bears travel to the forest to look for them, the two groups are re-united and once again head to Earth to stop an evil force named The Spirit from removing all caring from the world. When The Spirit destroys the key that locks the book she lives in, Secret Bears comes the rescue and simply creates a new key with her Belly Badge, with the villain being locked away for good. The Care Bears Movie

Secret Bear makes only a few background appearances in DiC's Care Bears animated series, mostly appearing in large crowd shots. She is one of the bears seen cheering on a boy named Carl's soccer team, Split Decision is part of a large group of Care Bears and Care Cousins in a discussion about a girl named Lisa who believes there is a monster in her closet, Magic Mirror, and is among the bears meeting to decide what to do about the villainous Strato Nefarious. The Night the Stars Went Out

The second Care Bears feature film tells the story of how the bears, including Secret Bear, first came to Care-a-Lot after escaping the evil Dark Heart. Some time later the villain makes a new attempt to capture his fuzzy prey with the help of a girl named Christy, whom he grants athletic talent in exchange for her assistance. When she calls for help, the bears come to the rescue, only to caught by Dark Heart who is waiting nearby. Secret Bear and Friend Bear witness the two working together, and alert the rest of the their friends, who mount a rescue operation along with two children named John and Dawn. After freeing all the captured bears, the group confronts Dark Heart and are able to make him care, transforming him into a real boy. Care Bears Movie II: A New Generation

Secret Bear makes only a few appearances in Nelvana's Care Bears Family television series. When she learns of No Heart's plans to create a spell that will summon a "Cloud of Uncaring", she must alert the rest of the bears by playing charades, but because Friend Bear was not present, she has trouble getting her point across, leaving an exasperated Brave Heart Lion finally laments "Boy, if Friend Bear were here she'd be able to understand what Secret Bear's trying to tell us..." The Cloud of Uncaring

Secret Bear, along with Thanks-a-Lot Bear, makes their television debut when she noticed that Grumpy's "Care-a-Van" has been vandalized. In this series, she uses feminine pronouns in contrast to her previous roles in the 1980's series. She is later seen among a crowd of spectators during the annual Belly Badge Bout competition witnessing what appears to be Wonderheart Bear's new powers, but it turns out the cub was just secretly using some of Tenderheart's Care 'N Share Charms to grant her own wishes.

As part of her secretive outlook, Secret usually talks in whispers or low volume.

2002-2006: You can tell anything to Secret Bear. She's that special kind of friend people love to swap secrets with. You can count on her to guard your secret with care. Even her tummy symbol says, "your secret's safe with me." It's a heart-shaped padlock!

Caring Mission: She reminds us of the importance of trust between friends.
Symbol: A heart-shaped padlock!
Personality: Warm, loyal and dependable.
Character Quirk: She likes to talk and write in code.
Color: Raspberry Red.
Best Friend: Friend Bear
Relationship Challenge: She wishes Good Luck Bear would share some of his lucky secrets with her!
Motto: The secret to friendship is trust!

20th Anniversary: You can share your innermost thoughts with Secret Bear. She's friendly and easy to communicate. You can count on her to guard your secret carefully because she's trustworthy and very loyal. She'll never accidentally reveal a secret. Secret Bear's tummy symbol is a heart-shaped padlock. It shows that she is a caring, trustworthy, 100% faithful friend. 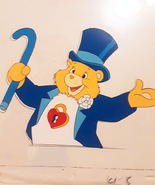 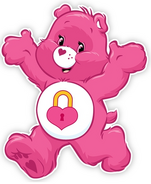 Retrieved from "https://carebears.fandom.com/wiki/Secret_Bear?oldid=26329"
Community content is available under CC-BY-SA unless otherwise noted.