Share Bear is a Care Bear who was first introduced in the 1980s toyline, and later made her animated debut in The Care Bears Movie in 1985.

During Nelvana's Care Bears Family TV series, she had her own PSA segment at the end of some of the earlier episodes, and was the focus of the 2009 direct-to-video movie Share Bear Shines.

Share Bear has lavender purple fur and her Belly Badge was originally a pink sprinkled ice cream soda with two straws in it. However, it was changed in 2002 to two heart shaped lollipops (one being pink with a blue heart and stick and the other being blue with a pink heart and stick). This change was made due to concerns from Play-Along-Toys (who owned a license to the care bears characters at the time) that sharing drinks can spread harmful bacteria and even viruses. The decision was made after an outbreak of Meningitis in the U.S. the year prior.

If sharing truly is caring, then Share Bear may just be the best of the lot. This incredibly selfless bear would gladly give up her last possession to make someone happy, even if she couldn't magically duplicate it first. But sharing objects is only half of her character, and she just as willing to share a laugh, some fun, sweets, or some advice with anyone around. Her personality is fitting to her horoscope, which is Virgo.

Her belly badge gives her the power to create tangible lollipops, which can be used to help her solve any problems she may be facing, although this method is generally only used as a last resort. The belly badge also has the power to duplicate and divide items, as shown in Adventures in Care-a-Lot and Unlock the Magic.

In the 2012 Welcome to Care-a-Lot series, she also has the ability to talk to animals.

Share Bear makes her animated debut in the Care Bears first theatrical film as one of the residents of Care-a-Lot who welcome two children named Kim and Jason to their high-altitude home. However, when the kids, along with Secret Bear and Friend Bear, are accidentally transported to the Forest of Feelings, she joins the crew of the Cloud Clipper to search for them. After re-uniting with their friends and making new allies in the Care Bear Cousins, she is among the team who travels to earth to help stop The Spirit from finishing her spell that will remove all caring from the world. The Care Bears Movie

Share Bear appears in several episodes of DIC's Care Bears television series, beginning with her and a group of bears traveling to Earth to join two boys named Sanford and Murphy on a camping trip. Camp She later makes return trips to help a boy named Joey overcome his self-consciousness due to his new braces, Braces assist in building a soap box derby racer for two girls named Kathy and Tricia, Soap Box Derby, and convince a girl named Patti that her father still cares about her even if he can't make it to her school play. The Show Must Go On

She has her first encounter with the villainous Professor Coldheart when he uses his newest acquisition, a magic mirror, to reverse her personality, temporarily making her selfish and un-caring before Grumpy Bear devises a way to change her and the rest of the bears back to normal. Magic Mirror When bears encounter a new villain named Strato Nefarious, who is stealing the stars from the sky, Share is part of the team that assaults his cloud ship with a Care Bear Stare. The Night the Stars Went Out Later, when a town is plagued by a terrible drought, Share helps two children who are lost in a tunnel while following a dried-up riverbed. Dry Spell

The second Care Bear feature film tells the story of how the Care Bear Family, including Share Bear, first came to Care-a-Lot after escaping the clutches of the evil Dark Heart. Some time later, the villain makes another attempt at capturing his furry prey by setting a trap with the help of a girl named Christy. Share is among the bears caught (that is the only thing she is doing there) when she comes to rescue Christy when she fakes being in danger, and has to be rescued by the few remaining members of the Care Bear crew with the help of two children named John and Dawn. When Christy laments her actions, she helps the bears take down Dark Heart by getting hit by one of his paralyzing rays, causing him to care for her and remove all evil from his body, turning him into a real boy. Care Bears Movie II: A New Generation

While Share doesn't have many speaking appearances the Nelvana-produced Care Bears Family series itself, she does have her own PSA segment that appears at the end of some episodes in the first season called "The Care Bears Share a Lesson in Caring", which often involve Share Bear solving a problem or ending an argument among some children by giving a sharing solution.

Her first major appearance in an actual episode is in the episode Grams Bear's Thanksgiving Surprise, when she travels to Earth to help a boy named Tony prepare to give a speech at his town about Thanksgiving. However, when a mad baker named Sour Sam corrupts the citizens with his Crabby Apple Pies, she and Tony must confront him along with Grams Bear and reverse the damage he's done.

Around 1991, Share Bear and several other Care Bears received temporary redesigns in both artwork and plush form in order to bring about environmental awareness. Despite appearing in several books and even stickers, this new line was relatively short-lived due to a lack of popularity and low sales.

Share Bear's appearance for this series featured her with purple fur with a much different tummy symbol that depicted a pink heart with an overarching rainbow ending in flowers.

Share Bear is a character in the first computer-animated Care Bears film, Journey to Joke-a-lot. After Funshine Bear runs away to the titular town so his practical jokes can be appreciated, he is crowned king as part of a secret plot by a rat named Sir Funnybone to steal the royal treasure, and Share is among the bears who go on the mission to find Funshine and come to Joke-a-lot to help stop him.

In the second CGI Care Bears video, Share Bear is among the residents of Care-a-Lot who welcome their new neighbors, Me Bear, Messy Bear, and Too Loud Bear to the community. Later in the film, when the new bears abuse the power of Wish Bear's wishing star Twinkers, their greed eventually becomes too severe and Care-a-Lot begins to fall apart at the seems. Its up to the Care Bears, including Share, to rebuild it in the aftermath.

Share has a slightly bigger part in the movie as one of the problems Twinkers fixes near the start of the movie, as she is trying to extract rainbow sap from the trees to make into syrup for the rainbow lollipops she wants to make. The wish comes true and the sap flows out, but the wish works too good and Share ends up handling far too much sap than she thought. The syrup is then later used for Grumpy's rocket to return Care-a-lot to normal.

Share Bear appears in the Care Bears: Oopsy Does It! direct-to-video film as one of the citizens of Care-a-Lot whose Belly Badge is stolen by Grizzle after he tricks Oopsy Bear into helping him.

Share is one the main five recurring Care Bears. Her trademark signature look is a set of pink hair bobbles to match her shoulder bag with a pale pink heart in the middle.

As a member of Care Bear Honeys, she plays the tambourine.

She seems to have a very slight speech impediment called a Rhotacism where she seems to subtly mispronounce or soften her "R's". Sometimes it may be more prominent in some episodes, making her sound a bit younger than the rest of the Care Bears

When Share Bear travels to the fabled home of Princess Starglo, said to be the one who turns baby twinklets into full-grown wishing stars, she finds it less hospitable than the stories suggest. As Starglo denies her request to help her young star friend grow, she reveals that she is dismantling her entire operation since no one believes in her anymore. While Share tries to get her to change her mind, a group of bears, including Cheer travel to Starglo's home to look for her, and end up using a Care Bear Stare to change her outlook on the situation and make stars again.

Share is one of the main characters in Care Bears: Welcome to Care-a-Lot. In this series, Share is potrayed as a cook who enjoys making lovely treats, and enjoys sharing them with her friends.

She lives in a tree house in the Forest of Feelings.

Once again, Share is a main character in Care Bears: Unlock the Magic. Share is the Team Communicator of the Cloudseeker and is portrayed as the voice of reason.

2002-2006: Nobody knows how to share like Share Bear. She is a friendly bear who knows how much fun it is to give some of her good things to others. She thinks that sharing is such a treat, that she shows it with her symbol - two heart-shaped lollipops!

Caring Mission: Shows people how to share.
Symbol: The hearts on her two, crossed lollipops symbol shows that the root of sharing is caring.
Personality: Generous and sharing.
Character Quirk: She collects little things to give away, but gets distracted by the strangest things at the worst times.
Color: Lavender.
Best Friend: Tenderheart Bear, Cheer Bear
Relationship Challenge: Funshine Bear—he's always playing jokes on her.
Motto: Do your share of sharing!

20th Anniversary: The Care Bear who helps others learn about sharing the good things they have is Share Bear. She is unselfish and giving herself, and if she could, would even share the symbol right off her tummy. Her symbol, a sundae with two straws and hearts, shows that true sharing is a treat that comes from the heart.

2004 Cub: Even though she doesn't have the "sharing thing" down just yet, you can't say Share Cub isn't trying! She's an adorable baby bear who's learning all about how much fun it is to share. That's why her tummy symbol - a smiling heart - is such a good reminder!

2007-2011: Nobody shares like Share Bear. She may be a little sweetie - but she always has the biggest heart and plenty of love to give. She often says, "We can do this together!" You'll know her by her curly hair and the little satchel she carries. It's full of lollipops - perfect for sharing!

2020-present Need something? Anything? If Share Bear has it, she’ll share it! Carefree and loving, Share Bear is happiest when she’s with her friends – or baking! She loves sharing so much that she shows it with her belly badge – two heart-shaped lollipops!

The Bears Are Back in Town - The Ultimate Guidebook: Sharing is caring! This friendly, empathetic bear is the glue that holds the Care Bear crew together in times of stress. If there's ever a disagreement, Share Bear is always able to find a friendly solution. Her excellent communication skills make her the perfect ambassador for when the Care Bears meet new, sometimes strange, creatures in the Silver Lining. Share Bear has many interests, including painting, baking and talking to animals. But most of all, she enjoys connection with others and sharing the love. 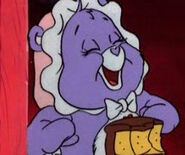 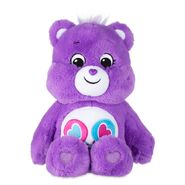 The most current Share Bear plushie available for sale. 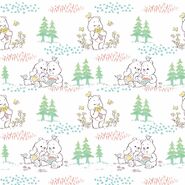