Sweet Dreams is essentially the female equivalent to Bedtime Bear. Like her drowsy double, she believes that rest and relaxation are the cornerstones to wellness, and tries to help everyone get their required z's by bestowing good dreams and happy thoughts.

She has mauve fur and her Belly badge is a light pink sleeping crescent moon resting on a cloud surrounded by small hearts.

Sweet Dreams made her debut in 2005 as part of a new wave of Care Bears toys from Play Along. She was made available in several varieties, including comfy plush, "troll hair" plush, and a 12" limited edition passion fruit-scented plush that is packaged and comes with a Care Bears Family DVD.

Sweet Dreams received a redesign only a short time after her debut to emulate the style of characters from Adventures in Care-a-Lot and has her hair pulled up in a pony tail with a light blue scrunchie, and wears a pink sleeping mask on her forehead.

While she doesn't have any speaking lines in the series itself, she does appear in its corresponding toyline.

Sweet Dreams makes her first appearance in a Care Bears television series in Welcome to Care-A-Lot.

She makes a cameo appearance in Bearied Treasure as seen as a statue on the front of the ship during the treasure hunt.

She makes a physical appearance in Night Bears, it's revealed that she is responsible for giving the other bears sweet dreams. Unfortunately, she accidentally gave the bears nightmares when a plainbow affects her belly badge powers.

2005-2007: Sweet Dreams Bear whispers delicious thoughts as you sleep. She helps others have the best mornings by giving them the happiest dreams. This charming bear knows smiles aren't just for daytime. She wants you to rest as pleasantly as her tummy symbol - a drowsy moon drifting off to dreamland.

2007-2010: Sweet Dreams Bear whispers pleasant thoughts as you sleep. She helps you have cheerful mornings by giving you the happiest dreams. With Sweet Dreams by your side, you'll sleep as peacefully as the drowsy moon on her tummy!

2012-2018: Sweet Dreams Bear wants you to have the best mornings by making sure you have the happiest dreams at night. That's why she wants you to rest as pleasantly as her belly badge - a drowsy moon drifting off to dreamland. Sleep tight! 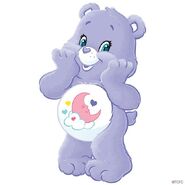 A more modern 2D appearance of Sweet Dreams.
Add a photo to this gallery

Retrieved from "https://carebears.fandom.com/wiki/Sweet_Dreams_Bear?oldid=26728"
Community content is available under CC-BY-SA unless otherwise noted.