Red heart with a small white wing on each side

She is an aqua blue rabbit and her Belly badge is a large red heart flanked by two small white wings.

As her name suggests, she is by far the fastest of all members of the Care Bear Family, becoming a blue blur that leaves a cloud of dust in her wake, yet her overconfidence can sometimes get the better of her (usually punctuated with phrases like "Swift Heart Rabbit is uuunnnbeataaabllee!"). Regardless, she always remains loyal to her friends and brave in the face of danger.

The exact opposite of Lotsa Heart Elephant, she prefers to get things done as quickly as possible, provided she has still has time to gloat beforehand. She also happens to be the niece of the White Rabbit of Wonderland.

Swift Heart makes her television debut in the very first episode of DiC's Care Bears series, where she helps plan a party for Birthday Bear. The Birthday Later, when Cheer Bear becomes depressed because she can't seem to cheer up Grumpy Bear, Swift Heart, along with several other characters, take part in a comedy show called "Laugh Night" to try and lift both their spirits. Last Laugh

When a young girl named Melanie can't stop daydreaming, Swift Heart and the rest of the Cousins take her to the Forest of Feelings, a place they believe is better than any daydream, in hopes of helping her to stop, but are interrupted by Professor Coldheart. Day Dreams. Later, when a drought threatened a town on Earth, she and Proud Heart Cat joined the Care Bears in investigating, and were able to break their friends out of a cave using a combined Care Cousin Call. Dry Spell.

The second Care Bears film tells the story of how the Care Bears and Care Bear Cousins, including Swift Heart, arrived in the Kingdom of Caring for the first time. While still a cub, Swift Heart stowed away inside True Heart Bear's backpack on her first trip to Earth to help two children named Dawn and John. Later, when the villain, Dark Heart, begins to capture the Bears and Cousins, Swift Heart is among the few Cousins not to be imprisoned. She is present when Dark Heart is defeated and turned into a real boy and bids goodbye to him and the other children. Care Bears Movie II: A New Generation

Swift Heart first appears in the very first episode of Nelvana's Care Bears Family series where she helps prepare for Care-a-Lot's "birthday" celebration, and later has to travel to No Heart's Castle to help rescue Baby Hugs and Baby Tugs from the evil wizard himself. Care-a-Lot's Birthday

During the annual Care-a-Lot Obstacle Race, Swift Heart is one of the contestants chosen and favored to win the title of Queen for a Day. However, even after Mr. Beastly cheats his way into the competition and threatens to move Care-a-Lot if he wins, she doesn't take the race seriously due to her overconfidence and gives him a lengthy head start. Her gloating eventually gets the better of her after she gets caught in a thorn bush, but Care-a-Lot is narrowly saved by a last-minute win by Lotsa Heart Elephant. In the end, Swift Heart apologizes for getting a swelled head The Great Race. Later, Swift Heart participates in helping a herd of helpless little stars reach Big Star Point The Big Star Round-Up and joins in stopping Dr. Fright from taking over a carnival Bravest of the Brave. She also accompanies Tenderheart Bear and Good Luck Bear to a beautiful valley where they meet Perfect and Polite Panda, the long-lost members of the Care Bear Family The Long Lost Care Bears. In a basketball game, Swift Heart is among the Care Bear Cousins participating against the Care Bears. Unfortunately, during the game, she is injured, forcing Lotsa Heart to take her place. Order on the Court

Swift Heart is a central character in the third Care Bears feature film, and is revealed to be the niece of the White Rabbit of Wonderland. When her uncle comes to Care-a-Lot asking for help in finding the missing princess of Wonderland, Swift Heart and her friends manage to find a nearly identical girl named Alice, whom they take to the magical realm in hopes of finding the real princess.

Splitting into two groups, Swift Heart, along with Grumpy Bear, Good Luck Bear, and Brave Heart Lion, follow the trail of the Mad Hatter to discover the princess's location in the lair of Stan the Jabberwocky. By freeing her and making their way back to the palace, they are able to foil the plot of the Wizard of Wonderland and keep him from ascending to the throne himself. The Care Bears Adventure in Wonderland

Swift Heart is one of nine Care Bear Cousins who received a redesign for their 2003 re-launch toyline. Her appearance remains largely the same, but with larger, floppier ears, and a modified belly badge that moves the wings to the top of the heart rather than the bottom. This version has not appeared in any form of 2000's Care Bears media aside from merchandise.

Swift Heart makes two appearances in Star Comics' Care Bears series. In the issue 3 story "Blue Who?", it is she who alerts the Care Bears that the Forest of Feelings has mysteriously turned blue and everyone in it had begun to act strangely. She herself eventually succumbs to the effects and begins to slow down and completely run out of energy before the Care Bears manage to find the source of the problem in the form of a group of aliens named The Gloomies, whom they eventually trick into leaving the planet.

In the issue 5 story "The Very First Care Bear", a prequel to Care Bears Movie II: A New Generation, Swift Heart is one of the Care Cubs rescued from Dark Heart's lair by True Heart Bear and Noble Heart Horse, and taken to safety in Care-a-Lot.

This version of Swift Heart has the added quirk of talking extremely fast; so fast that it's usually hard for the Care Bears to work out exactly what she's saying because her words tend to blur together.

Swift Heart Rabbit is sometimes the hardest character to pin down in terms of gender, which seems to vary from one medium to the next (and in some cases within the same medium). The character's earliest profile from American Greetings describes Swift Heart as male, which is seemingly substantiated in the DIC television series episode "Day Dreams", where Professor Coldheart exclaims "Get him!" to Frostbite after Swift Heart escapes one of his traps.

However, Swift Heart seems to present as female in all Nelvana-produced material, including the Care Bears Family TV series and all Care Bear movies. They even go so far as to specifically call her the White Rabbit's niece in the third film, Adventures in Wonderland.

This matter is further complicated in the Care Bears comic book series by Star Comics, where Swift Heart is called both male and female in the same issue (specifically issue 3 in the story "Blue Who?"). 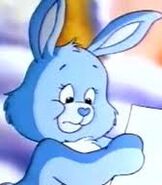 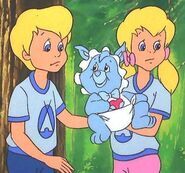 Retrieved from "https://carebears.fandom.com/wiki/Swift_Heart_Rabbit?oldid=29095"
Community content is available under CC-BY-SA unless otherwise noted.