Heather Avery
Take Care Bear is a Care Bear who was first introduced in a promotional coloring book, and has since been revived as part of the franchise's 2000's toy line.

In the 80's, she had honey-yellow fur and her Belly badge was a red apple, while in the 2000's she is light hot pink and her badge depicts a purple heart holding a yellow star.

Some may think of Take Care Bear as overly cautious, but this bear really puts the "care" in Care Bear. While she may have a tendency to be over-protective, it's only because she values her friends so much, and has made it her business to keep everyone healthy and in one piece. When it comes to Take Care Bear, safety always comes first.

Care Bears and the Big Sneeze

Take Care's first and only appearance during the franchise's original 80's run was in this Care Bears coloring book that was sold with Triaminic Liquid cough syrup, where our fuzzy spokes-bear expunged the benefits and proper administration of the helpful elixir.

Take Care was plucked from obscurity in the Care Bears relaunch toyline in the early and mid 2000's, and received a rather large redesign in the process. Though she now sports pale pink fur and a new belly badge, she still retains her happy helpful attitude from before.

She has appeared as a number of different products, including a 10" plush with a "hugs and kisses" heart accessory, a "troll hair" plush, a 7" plush with a bathrobe and doll accessory, a beanbag plush with nightcap, and a large 13" talking plush that came packaged with a special DVD.

2002-2006: Take Care Bear is one very careful bear. As Care-a-Lot's expert on "looking before you leap," she teaches others how to be safe and careful. She is also a warmhearted bear who wishes the best for everyone. Her symbol shows her caring, careful nature - a smiling heart hugging a star.

The Bears Are Back in Town - The Ultimate Guidebook: This careful bear wishes the best for everyone. At times, she may come across as overly cautious and overprotective, but that's just because she cares so much. Take Care Bear believes it's her job to make sure everyone is healthy, happy, and in one piece. She may seem exceedingly wary at times, but her friends know that she's just a caring bear who wants what's best for them. 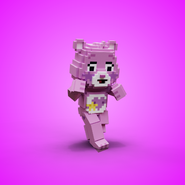