Thanks-a-Lot Bear is a Care Bear who first appeared as a plush doll in 2004 during the early 2000's franchise relaunch toyline.

Probably the most thankful Care Bear of them all, Thanks-a-Lot wholly believes in the power of magic words, and that saying the right thing in the right way can make anyone's day better. Aware enough to know that neither she nor anyone can do everything alone, she expresses her gratitude whenever possible, and encourages others to do the same.

She has blue-green fur and her Belly badge is an upward-angled shooting yellow shooting star with a red heart in the middle and a rainbow trail.

Thanks-a-Lot debuted in toy form beginning in 2004, and has since been made into a variety of products, including beanbag plush, "troll hair plush", and 8" and 13" plush varieties. The 13" plush also has a talking feature, and is voiced by Sherry Lynn.

He is also the subject of the 2005 children's book Care Bears: Giving Thanks by Scholastic, a Thanksgiving story that also happens to features a rare 2000's appearance of the Care Bear Cousins.

Thanks-a-Lot makes her television debut in Welcome to Care-a-Lot.

She debuts in "Sleuth of Bears", When a slumber party thrown by female Care Bears in interrupted by news that Grumpy Bear's "Care-a-Van" was attacked, she was among those who witnessed it.

in Shunshine, she once had her birthday party ruined when a vain Funshine Bear blue out the candles on her cake before she could.

In Cub Bouts, She is later seen among a crowd of spectators during the annual Belly Badge Bout competition witnessing what appears to be Wonderheart Bear's new powers, but it turns out the cub was just secretly using some of Tenderheart's Care 'N Share Charms to grant her own wishes.

Although she doesn't appear in Unlock the Magic, she has appeared in supplementary material.

Despite her' Unlock the Magic-style appearance lacking eyelashes, The Bears Are Back in Town - The Ultimate Guidebook still refers to her with female pronouns. In Unlock the Magic, Thanks a Lot Bear is Male. 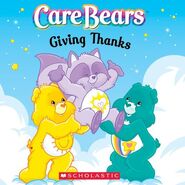 Thanks-a-Lot, as seen on the cover of the book Giving Thanks.

2002-2006: Thanks-a-lot Bear is the special bear who reminds us to thank people who have been nice to us. She is quite thoughtful and loves to write notes and give gifts. Her bright symbol shows us that we make our world a brighter place whenever we say a single magic word - "Thanks!"

Retrieved from "https://carebears.fandom.com/wiki/Thanks-a-Lot_Bear?oldid=27090"
Community content is available under CC-BY-SA unless otherwise noted.