The Care Bears in the Land Without Feelings is a television special and the first animated appearance of the Care Bears.

Atkinson Film Arts made the first two Care Bear TV specials in 1983. They were later released to home video by Family Home Entertainment, now owned by Lions Gate Films, and formerly a division of MCA/Universal.  These shows have recently been re-released on DVD, and were being distributed only with the purchase of select special edition plush toys.

A girl named Donna is feeling a little lonely. The Care Bears are sent on a mission to help people like her express and share their feelings. They must also save a boy named Kevin from the evil Professor Coldheart. 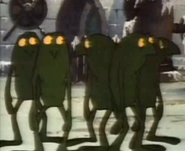 Green Creature Slaves
Add a photo to this gallery

For Credits, see The Care Bears in the Land Without Feelings/Credits.

Retrieved from "https://carebears.fandom.com/wiki/The_Care_Bears_in_the_Land_Without_Feelings?oldid=26695"
Community content is available under CC-BY-SA unless otherwise noted.