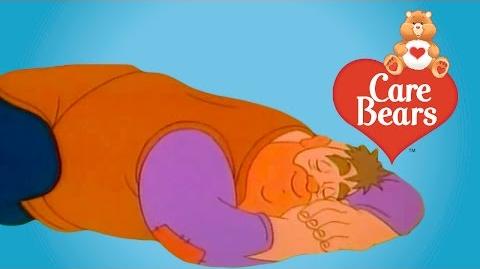 While playing in the Forest of Feelings, Baby Hugs and Tugs are discovered by a very much awake "Sleeping Giant ", who reveals that he only wants to get back to hundred-year nap. However, the cubs take this cue to play with him instead, and, much to his surprise, he actually enjoys it. When Tenderheart Bear arrives in a weather-surveying balloon, he find the two wayward cubs with the intimidating giant, who tells him to go look for a slumber flower that will put him back to sleep. I the meantime, he stays with the two young bears, who teach him how to have a good time with activities like hopscotch and hide and go seek.

The next day when Tenderheart arrives, he tells the giant that he found a whole valley of slumber flowers and he can go back to his slumber right away. However, the giant has had so much fun with the cubs that he changes his mind, saying he wants to remain with them forever and become a member of the Care Bear Family.

However, things don't go as planned when a heavy storm approaches the cubs, who are playing on the other side of the forest. When a tornado is spotted heading their way, the giant wants to go save them, but Tenderheart tells him that the route will take him directly through the slumber flower valley and likely put him to sleep. Saying he'll accept the risk to save his new friends, he rushes to the cubs and is able to cup them in his hands to avoid the heavy winds. After the storm passes, everyone seems to be okay, but the giant has now gone back to sleep thanks to the flora all around him. When the cubs ask when he'll wake up, Tenderheart sadly reports that it won't be for a very long time. As the two mourn the lose of their friend, Tenderheart reminds them that as long as they keep him in their hearts, he'll always be with them in spirit.

Retrieved from "https://carebears.fandom.com/wiki/The_Sleeping_Giant?oldid=23197"
Community content is available under CC-BY-SA unless otherwise noted.