Care Bear Wiki
Register
Don't have an account?
Sign In
Advertisement
in: Characters, Care Bears, Not yet seen in cartoons,
and 4 more

(Note: The subject of this article has conflicting sources to their gender. For the purposes of consistency and readability, gender-neutral pronouns will be used to address this character throughout this article due to their neutrality.)

Jack-O-Lantern
Trick-or-Sweet Bear is a Care Bear who first debuted as a toy exclusive bear.

Trick-or-Sweet Bear has orange fur with olive colored eyes, and their Belly Badge is a Halloween pumpkin, commonly called a jack-o-lantern.

Trick-or-Sweet is one of the numerous holiday themed bears to be released, such as America Cares Bear.

Trick-or-Sweet Bear first appeared as a toy that was released exclusively in Singapore.

Trick-or-Sweet was the first merchandise-exclusive Bear to have artwork done in the style of Unlock the Magic. 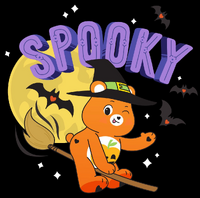 The Bears are Back in Town - The Ultimate Guidebook: A sly prankster with a taste of mischief (and candy), Trick-or-Sweet Bear is always coming up with new ways to trick their friends. Trick-or-Sweet can sometimes become easily distracted. But getting them to focus isn't too difficult, just wave a piece of candy in front of them and they'll focus. Trick-or-Sweet's pranks are all fun and games. They believe it's important to be able to laugh and never take anything too seriously.