Watchful Bear is a Care Bear from Care Bears: Unlock the Magic, who appears in the episode One Wise Bear.

Watchful believes that everybody should listen to their heart, and not listen to those who just don't care.

He is an elder Care Bear with wrinkly, light green-turquoise fur, a beard, and a brown cape. His Belly Badge is of a small golden star with swirls around it. 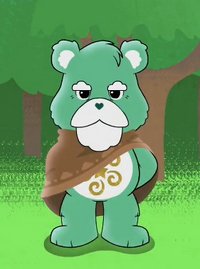 Tenderheart Bear met Watchful Bear a long time ago. in order to lead him into a way where Tenderheart can help the Care Bears even more than ever.

In modern times, Tenderheart and Watchful reunite, to where the latter is very impressed with Tenderheart for him to lead the way as he wanted. He is also happy with Cheer Bear for bringing an antidote and praises her for being a good leader. When he says to everybody to not believe negative thoughts, he vanishes.

The Bears Are Back in Town - The Ultimate Guidebook: This enlightened bear's words of wisdom guide the Care Bears in their times of need and help them get back on the right path when they seem lost. When a bear needs Watchful for guidance, he will appear before them. He might come to them in a meadow, on a mountain, or even in a dream, but he will be there.

Retrieved from "https://carebears.fandom.com/wiki/Watchful_Bear?oldid=26782"
Community content is available under CC-BY-SA unless otherwise noted.