A Yellow shooting star with three other stars

Wish Bear is one of the ten original Care Bears who first appeared on American Greetings greeting cards in late 1982. She helps make wishes come true, and even if they don't always come true, making wishes and working hard to help make them come true is still fun. Her fur color is turquoise; and her symbol is a yellow smiling shooting star. In the TV series Care Bears: Adventures in Care-a-Lot, she wears a star-shaped hair clip.

Twinkers, a wishing star, is her best friend (whom she met as a cub) who appears in Care Bears: Journey to Joke-a-lot as well as in The Care Bears' Big Wish Movie where Wish Bear is the main character.

In the second CG Care Bears video, Wish Bear is the main protagonist, and is among the residents of Care-a-Lot who welcome their new neighbors, Me Bear, Messy Bear, and Too Loud Bear to the community.

However, the new Bears abuse the power of Wish Bear's wishing star Twinkers, going as far as for Care-a-Lot to begin falling apart. Wish Bear alongside other Bears, team up to rebuild it before its too late. The Care Bears' Big Wish Movie

In the newest series, Wish has become a very practical and supportive bear. She is a good people-person, believes herself to be a sort of "mom" to the Caring mission, and advocates paying it forward. This is a change from previous incarnations, who mostly portrayed Wish Bear as naive and a little lost. Her role as a main character has also been reinstated.

2002-2006: Do you have a wish? Then Wish Care Bear is the bear you should wish for. She knows that sometimes

wishes come true, and that even when they don't, making wishes can be a lot of fun. She shows this with her tummy symbol - a smiling wishing star.

20th Anniversary: Wish Bear helps make people's wishes come true. She believes that there's not a worry in the world that a wish won't wipe out. Wish Bear is a dreamer, but a special kind of dreamer because her wishful thinking makes other' dreams come true. Wish Bear's wishing star tummy symbol reminds us that there is magic and hope in wishing.

2007-2011: Wish Bear has the best job in the whole world-to help make wishes come true! Her best friend is Twinkers, a wishing star that helps her grant wishes. But look out-those wishes don't always turn out like you hope. Wish Bear's belly badge is a bright shooting star with a rainbow trail. 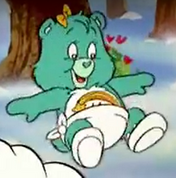 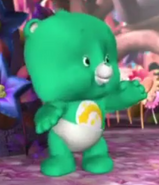 Wish Bear Pushed on Her Swing By Good Luck Bear 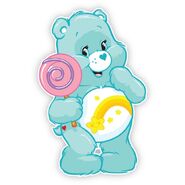 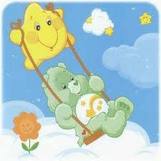 Retrieved from "https://carebears.fandom.com/wiki/Wish_Bear?oldid=22699"
Community content is available under CC-BY-SA unless otherwise noted.